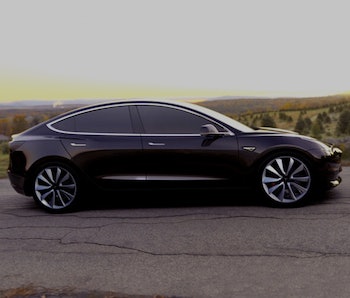 Looking to score some discounts with the Tesla Model 3? The $35,000 vehicle will be the company’s cheapest car when deliveries start later this month, but a number of countries and jurisdictions are offering price discounts in a bid to switch the world to electric. On Monday, driving test provider Driving-Tests.org announced plans to offer the first non-governmental incentive program to buyers, offering up to 100 rewards worth $500 each intended to cover the cost of in-car driving lessons for their child. All prospective claimants need to do is send proof of their child learning to drive in their Model 3.

“We believe that the big idea here is to get teens interested in clean vehicles,” Andrei Zakhareuski, founder of Driving-Tests.org, tells Inverse. “Incentivizing teens to get some behind-the-wheel experience with a Tesla Model 3 is a way to show them what great potential (no pun intended) electric cars have. We are excited to be the first private organization to offer such incentive to Model 3 owners and we hope other companies will follow.”

Until now, incentives have covered the cost of the vehicle’s purchase. Buyers across the United States will receive a $7,500 federal rebate on the cost of a new Model 3, but this only lasts until an automaker sells 200,000 registered plug-in vehicles. As Tesla aims to produce 10,000 Model 3 vehicles per week by 2018, chances are it could become the first manufacturer to trigger this rule. When that happens, buyers would have to depend on other incentives, like the New York state rebate of $500, or the Colorado tax credit of $5,000.

The new Driving-Tests incentive could change this. The offer is open to owners in both the United States and Canada. To qualify, customers need to send the company proof of purchase of the car itself, along with a short video that shows the owner’s child going for a practice drive in the Tesla. It doesn’t need to be long — driving slow speeds around a parking lot will suffice, much like this video of the first production Model 3 that was released earlier this month:

It’s new territory, but the school’s pioneering offer could serve as a new avenue to persuade new drivers to switch over to electric vehicles. Studies have shown that drivers who are exposed to electric vehicles are more likely to have a positive opinion of them, so encouraging teens to get behind the wheel in exchange for an incentive could lead them towards choosing an electric vehicle as their first car. With the Model 3 facing competition on the low end from the Chevy Bolt and Nissan Leaf, these new drivers could find themselves with a number of options when it’s time to pick up their first set of keys.