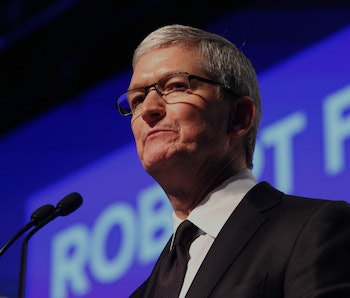 Apple’s iPhone 8 is going to be big. So big, in fact, that the company is struggling to finish four of its headline features. The smartphone, expected to launch this fall alongside an iPhone 7S and 7S Plus, comes in the tenth year of the line’s existence, and Apple is putting out all the stops to fend off a challenge from its competitors.

A report from Fast Company published Tuesday cites sources that claim Apple has set itself a difficult task, and while the company is not suggesting a delay, the phone could launch with critical features missing. The issue with some of these features rests with software, meaning the company could ship the phone with necessary hardware and enable the software side at a later date once it’s ready.

Apple has shipped a new iPhone every year since its first launch in 2007. The pressure is on to launch a smartphone that brings Android users on side while keeping iPhone users in the fray. Here are the hurdles Apple faces:

The new report corroborates what Apple blogger John Gruber told followers last week. Apple has the hardware in place to enable wireless charging in the iPhone 8, but the issue is software-based. Gruber claimed than an iOS 11.1 update could launch after the phone goes on sale.

The company has precedent for this: the iPhone 7 Plus Portrait Mode, a headline feature from last year’s smartphone launch, used the dual lens camera to blur the background and give photos a DSLR-like style. But the feature, which used information from both sensors to judge depth and decide which parts of the photo contained the subject, was not ready and only became available through a later update.

The feature is likely to work similar to other Android devices, where the user places the phone on a specially-designed pad to start charging. Gruber claimed that Apple would sell the pad separate to the phone, but this report makes no mention of what, if any, extra purchases would need to be made to use the feature.

Possibly the most exciting feature on the iPhone 8 is its screen. Apple plans to ditch LCD technology in favor of OLED, enabling a non-square design that stretches to the far edges. Its ability to switch off lighting in select areas means blacks appear darker than ever before. The iPhone 8 is expected to include a 5.8-inch screen in a phone similar size to the 4.7-inch iPhone 7.

Apple has never made a phone with an OLED screen, though, and it faces sourcing woes due to a global scarcity in OLED displays. The company is sourcing its screens from Samsung, but the new technology could cause issues.

The phone is expected to include a 3D sensor on the front, which some reports claim will be used to unlock the phone instead of a fingerprint scanner. At this stage, it’s still unclear what tasks Apple will delegate to the new scanner, but software woes mean the company may have to ship the phone with a non-functional scanner, enabling the feature at a later date via a software update.

Although it is likely the fingerprint scanner will be placed under the display, this has been a source of frustration for the company as the new OLED display leaves little space to place a scanner. Previous leaks suggested Apple was exploring a fingerprint sensor on the rear of the device, while other reports claimed the 3D scanner would be able to identify a user fast enough to make the fingerprint scan a thing of the past.