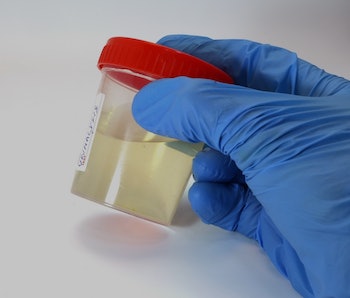 Marijuana enjoys a greater degree of acceptance in the United States than ever before: 29 states have legalized it for medical or recreational use. But even if your state’s laws allow marijuana users to freely partake, there are still a number of situations in which it’s not okay for you to have the active chemical in marijuana, Δ9-tetrahydrocannabinol, in your system. Therefore, it can be important to know how long THC stays in your system. Here’s the long and the short of it: THC can show up on a drug test for anywhere from two hours to two months. Read on to find out what affects this.

Regardless of state laws, cannabis is still classified as a Schedule I substance under the Controlled Substances Act, the highest level of illegality that indicates no accepted medical uses. This means that if you’re applying for a federal government job, even in a state where marijuana is legal, you could still be disqualified by a positive drug test. You also probably shouldn’t show up to a meeting with your probation officer if you have detectable levels of THC in your system. And if you drive a vehicle for work? Forget about it.

So with that in mind, let’s take a look at how THC travels through your body. To keep it simple, we’ll talk about how things work when you smoke. For other administration routes — edibles or rectal dosing, for instance — the intoxication process is different, but the clearance process is similar.

Within a few minutes of smoking marijuana, your body achieves peak blood levels of THC. Your blood concentration falls as the effects wear off, usually after a couple hours. But most common drug screens don’t test your blood. They test your urine. And urine tests are much more complicated. Here’s why.

Whereas many common recreational drugs — cocaine, heroin, MDMA, methamphetamine, etc. — are water-soluble, THC is a fat-soluble chemical. This means that it can be stored in the fat molecules in your body, and therefore can remain detectable for much longer than other drugs, which typically clear within a few days.

Beyond that, it’s not typically THC that drug tests detect, but THC metabolites, the substances that are produced when your body breaks down THC. The primary metabolites of THC are 11-hydroxy-▵9-tetrahydrocannabinol (11-OH-THC) and 11-nor-9-carboxy-▵ 9-tetrahydrocannabinol (THC-COOH). For our purposes, we’ll focus on THC-COOH because it’s the primary metabolite for which most workplace urine drug tests screen. These drug tests are typically done with a technique known as enzyme multiplied immunoassay technique (EMIT), which is one of the cheapest screening technologies available. It’s the technology used in paper strips that you dip in a cup of urine.

THC-COOH, like THC, is fat-soluble. As we know, this means it clears your body very slowly. How slowly it clears can depend on how heavily you smoke. Most occasional users (smoking one or two times per week) will be able to pass an EMIT test within a day or two. So if you only smoke occasionally, and you smoke on Saturday, you should be able to pass a drug test on Monday.

But for frequent, heavy smokers, it’s not so simple.

A 1985 study of chronic marijuana users found that the average time that it took for heavy smokers to pass an EMIT drug screen was 27 days. So this means if you smoke every day for an extended period of time, it could take you a month — or more, since 27 is just the average — to clear THC from your system. On the extreme high end, one test subject took 77 days to consistently test negative.

The extreme variability of THC clearance rates is due to a couple interacting factors. Since people with higher body mass (aka fat) can store more THC and its metabolites, and since chronic smokers have exposed their bodies to more THC, both of these factors are negatively correlated with THC clearance rates.

So to answer the question of how long THC stays in your body: It depends. If you’re worried about a drug test for professional or legal reasons, your best option is to abstain from partaking. It’s as simple as that. Due to the highly variable nature of THC metabolism, there’s no way to say for sure how long THC will stay in your system.

More like this
Science
6.28.2022 10:00 AM
How are drugs absorbed in the body? The science of medicine, explained
By Tom Anchordoquy and The Conversation
Science
7.2.2022 12:00 PM
Why is my cat scratching furniture? The answer might surprise you
By Tara Yarlagadda
Science
6.27.2022 11:00 AM
Letting your cat go outside could spread “life-threatening” parasites — new research
By Amy Wilson, Scott Wilson and The Conversation
Related Tags
Share: