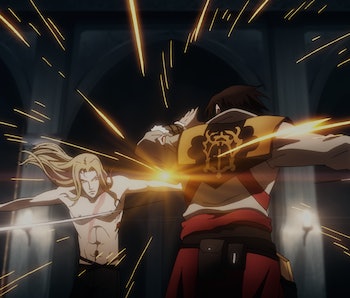 On Friday, internet TV giant Netflix released the dark, violent first season of Castlevania, a new anime based on the classic Konami adventure games released originally on the Nintendo NES. And the show is pretty dang good; written by acclaimed comic book writer Warren Ellis (Transmetropolitan) and produced by Adi Shankar, a Hollywood producer (The Grey, Dredd) known for making adult-oriented fan films such as the viral hit POWER/RANGERS.

If you manage to binge through every half-hour episode in one sitting — which should be easy, since there are only four — and want to check out the original games, like the original Castlevania or Castlevania III: Dracula’s Curse (the source material for the anime), here’s how you can play them.

Break out your actual NES and buy Castlevania.

If in the unlikely event you still have an NES or are willing to shell out for a used, working console, getting an actual Castlevania game cartridge won’t be as expensive or as difficult as you might think. Depending on condition, NES Castlevania games range anywhere between $15 to $80 or $90 on eBay.

Meanwhile, getting an NES is a different story, as finding a working NES in 2017 is a time-consuming task for which few people have the patience. Still, if you’re dedicated to recreating the experience, it’s worth a trip to your local brick-and-motor neighborhood video game store, which more often than not specializes in selling old video games. Don’t even bother with GameStop. You won’t even find Guitar Hero controllers.

Buy on the Nintendo eShop.

A more convenient option is to buy digital versions on the Nintendo eShop, which are virtual storefronts on today’s Nintendo consoles. You will need either a Nintendo 3DS or a Nintendo Wii U that you’ll have to connect to Wi-Fi. While a Wii U is much, much easier to connect to your flatscreen TV than the original NES, you won’t be able to recreate the feel of playing the classic games, not without that iconic square controller.

Also, now that the new Nintendo Switch is out, the Wii U is on its deathbed. So it’s getting more expensive to buy even refurbished consoles in places like Amazon. But the portable Nintendo 3DS is still going strong with no signs of stopping, so it’s possible to take Castlevania with you anywhere.

Digital versions also exist for the Virtual Console on the original Nintendo Wii, but there’s a smaller chance you even have one of those than a working NES. Still, if you can find one in your basement, it’s worth a shot. Remember: the Wiimotes use AA batteries.

Strictly speaking, the legality of game emulators for computers and laptops is grayer than R.O.B. So while I won’t explain step-by-step how to download and play emulators, I will say it’s super easy to set up, and you can start playing on your computer in just minutes. In short, different emulators exist for different operating systems (i.e. Macs will have different emulators than Windows PCs), so just bear in mind what OS you have.

The cool thing about emulators is that you can buy third-party USB controllers that are shaped and molded exactly like original Nintendo, Sega, and even Atari controllers. Quality differs depending on manufacturer, so just do some quick research and read the Amazon reviews before purchasing.

A generation of kids raised on Twitch are used to this: Save yourself the trouble of buying/downloading stuff by going on YouTube. There is no shortage of people who have completed entire Castlevania games and uploaded their runs on YouTube. So just kick back and enjoy.

Castlevania is now streaming on Netflix.