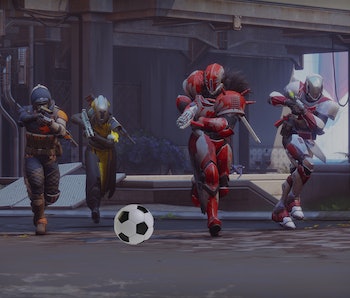 For fans of Destiny, there was a lot of fun to be had messing around in the Tower with the big purple beach ball or the soccer ball while you waited for your slower friends to gear up for the next Strike or Raid, and now, Bungie is enhancing that experience with some upgrades in the next social space, the Farm.

As seen in an IGN tour of the new space by Bungie’s Narrative Lead Ryan Ebenger, the Farm will include a fully-functioning soccer field that he only somewhat sarcastically calls Bungie’s “proudest new feature.”

Ebenger explained, “You can play fully-scored soccer with fellow Guardians while you wait for your Strike team to finish digging stuff out of their Vault for the next Raid or Strike.” Bungie’s reasoning is to continue making social spaces interesting for players that need to idle in-between missions. You can expect players that score goals to dance immediately, like below:

“We’re trying to find a way for people to entertain themselves in the space and a way to draw attention to themselves,” Ebenger said. “One of the challenges for Destiny 2 is to realize the idea that you’re going to be [at the Farm] with 25 other players, and we want to give you a way to draw attention to yourself and be noticed, to have people look at your gear.” Other activities will add effects or let Guardians run faster.

In Destiny 2, an assault from Cabal warlord Dominus Ghaul forces the Guardians to abandon the Tower and set up shop elsewhere, which is where the Farm comes in.

In the first Destiny game, the Tower famously had a large, purple beach ball idling players would head-butt and volley constantly, but there was also a harder-to-find soccer ball players could also kick around. The addition of nets, scoring, and fireworks in the Farm will no doubt making waiting for your slow-ass Clanmates to gear up that much more bearable.

Check out the full tour of “The Farm” right here:

Destiny 2 will be released September 6, 2017 with a beta due to start for PlayStation 4 pre-orders on July 18.

More like this
Gaming
19 hours ago
Why the Final Fantasy XIV billboard debacle puts the community at risk
By Willa Rowe
Gaming
20 hours ago
Everything we know about the Splatoon 3 OLED Switch in 10 gooey images
By Joseph Yaden
Gaming
19 hours ago
God of War Ragnarok trailer drops a massive clue about Atreus' future
By Hayes Madsen
Related Tags
Share: