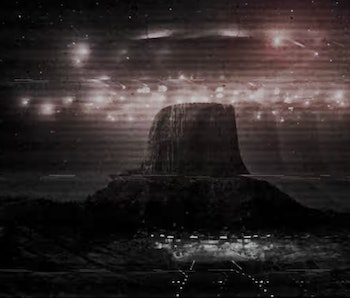 It wouldn’t be World UFO Day without an alien sighting, and on July 3, a mysterious teaser related to Close Encounters of the Third Kind visited the web. The spot, titled “This Means Something,” aroused a lot of suspicion, as fans wondered if Sony was teasing a remake or a sequel to Steven Spielberg’s classic film. Well, unlike so many UFO sightings, it appears we actually have a concrete answer about what’s really happening.

The video, which mostly consists of audio of an air traffic controller from the 1977 film, is promoting Close Encounters’s 40th anniversary, as it will return to theaters for one week in September. There isn’t any mention of the actual re-release — just a link to a website with the address “WeAreStillNotAlone.com” — but Deadline reports that the trailer is indeed just a promotion for the film’s upcoming theatrical re-run. According to Deadline, you’ll be able to catch Close Encounters starting on September 1 in the United States and Canada.

If you were hoping for a Close Encounters of the Fourth Kind, or some other sequel, this is kind of disappointing. Maybe just try viewing the video (which takes its name from one of Richard Dreyfuss’s lines in the original film) as a little something to renew your appreciation for one of Spielberg’s greatest movies.

Oh, and don’t bother going to WeAreStillNotAlone.com. It’s a Sony website where you can enter your email address to “receive updates on UFO sightings,” but the fine print explains that you’ll really just be added to a mailing list letting you know about “upcoming movies, DVD’s, soundtracks, free downloads, TV shows, cool promotions & events and more.”

More like this
Entertainment
Sep. 20, 2022
Constantine 2 signals new life for DC movies — but at what cost?
By Eric Francisco
Science
Sep. 24, 2022
Super-Earths may be the best places to look for alien life
By Chris Impey and The Conversation
Science
Sep. 20, 2022
New study shows one of Saturn’s icy moons may be extremely habitable
By Kiona Smith
Share: