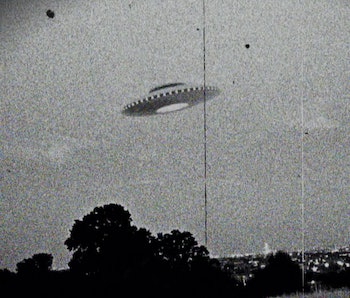 If you’re a believer, you’re not alone. As of 2015, a poll found that over half of Americans believe in intelligent alien life. Everyone has their reasoning, but some arguments are more convincing than others. Those who believe they’ve seen a UFO often call any official explanation of the phenomenon a cover up, or an excuse to draw the public eye away from what “really” happened.

Science fiction movies encourage the true believers and UFO deniers alike. Movies such as Independence Day and even the recent Phoenix Forgotten cast alien visitors as anything but benevolent. Fictional aliens are often dangerous or simply curious, real or make-believe, and their relationships with humans are always complicated.

So, we put together a list of a few of the most convincing UFO stories and sightings out there, with our very own realness scale*. Believe what you will — just don’t get yourself abducted for being a dick.

*Disclaimer: Even though, yes, we know UFOs are a myth, we’re going to put on our tinfoil hat for a few minutes and wonder what if.

In 1897, a “cigar-shaped” UFO supposedly crashed into a windmill belonging to Judge J.S. Proctor of Aurora, Texas. The incident was reported in the April 19 edition of the Dallas Morning News, two days after the crash occurred, and it claimed the pilot of the ship was “not an inhabitant of this world.” Supposedly, the pilot’s remains were buried in an unmarked grave at a local cemetery, and the ship was partially buried with the pilot. The rest of it is said to have been dumped down a well.

Barbara Brammer, a former mayor of Aurora, claims the whole thing was a hoax crafted in order to save Aurora. See, the town was suffering after a series of unfortunate events that included a fire, the local cotton crop dying out, a fever epidemic, and the cancellation of a planned railroad into town. The “hoax” put Aurora back on the map. But the events of that April still haven’t been fully disproven.

2/5 Realness: Kinda real. Can someone please dig up the grave?

One of the most disputed and often-studied UFO events in U.S. history concerns a pair of photos taken by Paul Trent after his wife, Evelyn, first spotted a slow-moving, metallic disk in the sky near their farm just outside McMinnville, Oregon. Trent only managed to snap two pictures before the disk was out of range, and skeptics and believers have fought over the photos since.

In the ‘80s, two journalists, Philip J. Klass and Robert Sheaffer, made it their mission to debunk the sighting. They concluded that the Trents lied about the time of day the photos were taken, so they, of course, had to be lying about the content of the photos. Ufologists have since contested that theory. But the photos were printed in Time magazine, making it one of the best-publicized UFO events in history. To this day, there’s still no consensus.

In 1965, a giant space acorn landed in the woods outside Kecksburg, Pennsylvania. That’s, at least, what the town members and volunteer firefighters who found the craft said. The alien craft was supposedly the size of a car and covered in writing that resembled Egyptian hieroglyphs. Locals claim that the U.S. military rolled in, secured a perimeter, kicked civilians out, and took something away on a flatbed truck. The military publicly denies having found anything in the woods that day.

Similarly, a local newspaper, the Greensburg Tribune-Review, ran a story the morning after the event, confirming the sighting and landing of a UFO, as well as the military’s intervention. A later edition of the paper claimed the exact opposite: that nothing had been found.

A fever of sorts overtook the Hudson Valley area in the mid-‘80s, with over 5,000 people reporting UFO sightings between 1982 and 1986. But the most significant event from that period came in the form of a mass sighting on March 24, 1983.

Throughout the evening of March 24, Hudson Valley residents reported seeing a V-shaped object covered in lights. It took interest in a nuclear reactor and bodies of water. Witness reports from that time are all documented in the book Night Siege: The Hudson Valley UFO Sightings, which quotes a witness as saying that on that night he saw an enormous flying object covered in multi-colored lights. “If there is such a thing as a flying city, this was a flying city,” he said.

The prolonged event is often considered to be a grouping of air force jets, though there’s no real proof of that.

The 1997 Phoenix Lights are one of the most-documented sightings in U.S. history. Documentaries and fictional adaptations alike have portrayed the lights — a v-shaped formation that reportedly blocked out the stars and was seen by hundreds — as an incredibly realistic unknown. The lights are often seen as being connected to similar events in the Hudson Valley (above) and are viewed by researchers and witnesses alike as benign in nature.

Phoenix Light deniers tend to settle on the explanation that the lights were either flares or a military thing, as there are several military and air force bases in the Phoenix area. But films such as Phoenix Forgotten are determined to posit that something wholly out of this world was seen that night.

Early in 2008, flashing orbs of light, red as fireballs, zipped through the air above the Texas plains. “First, I saw a yellow-red orb the color of lava in a volcano,” Constable Lee Roy Gaitan of Dublin, Texas, said. “Then, instead of the red orbs, there were nine or 10 flashing lights maybe 3000 ft in the air, bouncing and very bright. They hovered there, strobing for 2 or 3 minutes, bright like German auto headlights. Then they shot off at blazing speed like a school of fish, you know, when it’s frightened.”

At first, local air force bases denied having crafts flying in the area at the time, though many witnesses reported seeing military aircraft chasing after the lights. On January 23, it changed its tune, saying it had been conducting training flights in the Stephenville area that involved 10 fighter jets at the time. Conspiracy theories still abound.