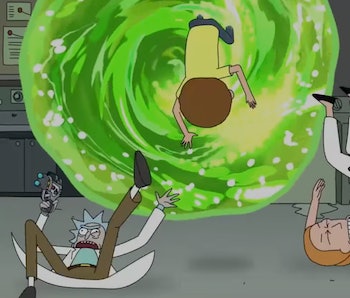 Now that fans finally have a taste of what to expect from the rest of Rick and Morty’s third season after the debut of a Season 3 trailer on June 29, the only thing on everyone’s mind is the next episode. What will happen when “Rickmancing the Stone” airs on July 30? We’ve got an idea, and it has everything to do with a really old Instagram post.

The trailer that debuted as part of a live stream event hosted by Rick and Morty showrunners Dan Harmon and Justin Roiland featured a smattering of scenes from the 10 episodes of Season 3, including the April 1 season premiere. There was a knock-off Avengers team called the Vindicators, a world that looked nearly identical to Mad Max, and at one point, the trailer showed Rick and Morty tied up in a precarious, gory situation with a creepy pianist in the background.

Their captor looks like some kind of creepy robo-alien Mozart seated at a piano on a platform. The shot lasts only a second in the trailer and unlike most of the other featured scenes, it isn’t revisited whatsoever. Hitting a piano key actually causes a small hammer inside the piano to strike one or more metal strings that are tuned specifically to certain notes. Those hammers poised over Rick and Morty’s heads — the same ones that crushed the skulls of the other captors — are part of a massive piano that’s probably controlled by the normal-sized piano in the background. All he would need to do is press the corresponding keys to kill the two characters.

Completely out of context, this would otherwise just be another random scene from Season 3, but based on an Instagram post from Spencer Grammer, the voice of Summer, on February 10, we know that this shot is from Season 3, Episode 2, “Rickmancing the Stone”:

We’ve previously only been able to speculate about the plot of the episode, but a close inspection of the script reveals the term “giant piano.”

So it would appear that the 1-second scene of Rick and Morty tied up in a giant piano will be in the very next episode.

Must Read: Everything We Know About ‘Rick and Morty’ Season 3

Episode 2 of Rick and Morty Season 3, “Rickmancing the Stone” will air on Adult Swim July 30 at 9 p.m. Eastern, and it will feature a “giant piano.”