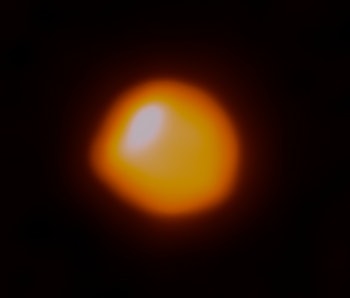 Unlike other stars, the red supergiant Betelgeuse, some 600 light-years from Earth, is a bulging mass, far from the perfect sphere one might imagine. Its blobby shape can be seen in this highest-ever resolution image of the belligerent star, which scientists consider to be a ticking time bomb of the cosmic sort.

Scientists used 47 of the colossal radio telescopes at the Atacama Large Millimeter/submillimeter Array ALMA observatory, located 16,000 feet up in Chile, to capture the image of scorching gases in Betelgeuse’s chromosphere, which is the inner atmosphere of the star. At just eight million years old, scientists believe this red supergiant — which is 1,400 times the size of our sun — will soon detonate into a burst so powerful, the explosion will be easily visible to our planet’s unsettled Earthlings.

The lopsidedness can be attributed to a localized temperature increase, according to the European Southern Observatory, which produced a massive lump on the Betelgeuse’s surface, not too different than the expanding, turbulent regions created when boiling water. Temperature fluctuations occur in our sun, too, with magnetic thunderstorms igniting solar flares off the sun and leaving cooler patches on the sun’s surface, which we see as sun spots.

But Betelgeuse is far more belligerent than our mellow, even-keeled sun, so its temperature fluctuations are all the more extreme. After just eight million years, scientists believe the star has lived hard and fast, nearly exhausting its reservoirs of hydrogen fuel. There’s no question that Betelgeuse is in its last stages of life, but it’s uncertain when the massive blob will collapse onto itself and explode.

The ALMA radio telescopes, many of which have dishes some 40 feet in diameter, do not capture traditional images of astronomical objects, like those from the Hubble Space Telescope, but instead pick up the long radio wavelengths sent into space by distant phenomena, and scientists can then create otherwise unattainable images using this data.

But you can still see Betelguese burning red in the night sky even without assistance from super-sophisticated cosmic-viewing telescopic arrays. It appears in the constellation Orion and is the radiant red-tinged star that serves as Orion’s shoulder.

Scientists plan to keep on observing this blazing, ticking, supergiant bomb before it becomes a terrifying blast of light in the sky

More like this
Science
5.11.2022 8:15 PM
An ultra-bright nova hid an elusive new phenomena — but astronomers caught it in action
By Kiona Smith
Science
5.4.2022 8:00 PM
Astronomers find a puzzling parasitic object — is it a black widow pulsar or something else entirely?
By Charles Q. Choi
Science
5.12.2022 3:38 PM
Look! Astronomers capture the first-ever image of the Milky Way's black hole
By Doris Elín Urrutia
Related Tags
Share: