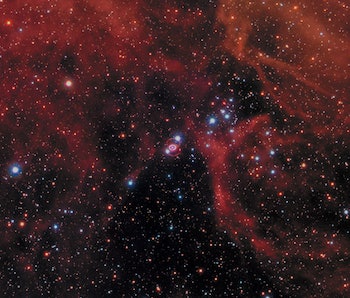 Thirty years ago to this day, a telescope operator in Chile discovered the closest supernova observed in over 400 years. The explosive death of this star, named 1987A after the year it was found, has been putting on a wondrous display for scientists ever since.

Back then, the Hubble Space Telescope wasn’t even launched into Earth’s orbit yet, so scientists were relegated to using ground observatories to identify and study most of the night sky.

Finally, in 1990, Hubble was launched, and scientists soon got their first glimpse of 1987A in much more prominent detail. Since the momentous discovery, astronomers have learned a lot about how supernovas form. In the case of 1987A, they found that the ring around the star was there 20,000 years before it exploded, like an omen for its death. That ring was then energized by the ultraviolet light given off during the explosion, which is what gives the ring its luminosity. Using the Chandra X-ray Observatory, they also found that the ring initially emitted a large amount of x-ray light, but the emissions have since plateaued and remained at a low energy since September 2015. The lower half of the ring even seems to be getting fainter.

Scientists found that the remnants of the star broke into two and are hurtling away from each other at 20 million miles per hour. The remnants are creating a dusty cloud, part of which will eventually float off to form a dusty stellar nursery for new stars to form in. These observations led scientists to believe that supernova explosions like this in the early universe most likely sparked the formation of most of the stars we see today.

There is at least one burning question remaining about 1987A that scientists can’t seem to figure out. They know that there was a flash of neutrinos from the explosion, which would mean that either a neutron star or a black hole has formed in its center. But, they don’t have the technology to confirm their theory.

For now, 1987A continues to amaze astronomers and has given them a wild lesson on what it means for the fate of the universe when a star this large dies.