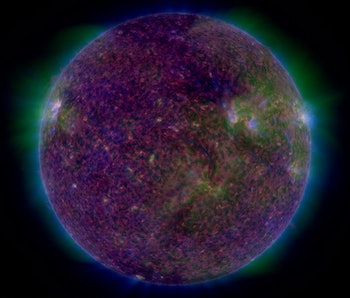 While our humble species has learned a lot about the sun’s behavior, we are still very much in the dark about the ultra-radiant sphere of fusion and scorching heat. And as Eugene Parker, the man who discovered the solar wind, said, “The sun is the primary puzzle in the universe.”

With the arrival of the summer solstice — or the longest day of the year — Inverse has rounded up five ways researchers are attempting to grasp the cosmic enigma we call the sun.

The Royal Observatory in Belgium is the keeper of the International Sunspot Number. Sunspots, first documented by Galileo Galilei in 1610, are cooler regions on the sun’s surface that form, disappear, and move around over time. They’re associated with solar flares, outbursts of radiation born from magnetic thunderstorms on the sun’s surface. Sometimes, the sun is covered in these solar boils, and other times, it’s spot-free.

On clear days, a long grey telescope protected under a white dome projects an image of the sun onto a large white piece of paper, where the sunspots show up as darker blotches. These allow astronomers to accurately draw and record the size and whereabouts of these phenomena.

Yes, Sunspot is a place, over 9,000 feet up in south central New Mexico that you too can visit. For over 50 years, the National Solar Observatory has exploited the area’s dry, clear air (the mountains are bounded by desert) to capture precise, high-resolution images of the sun while promoting solar education.

3. The Solar Telescope Atop Maui, Hawaii

The Daniel K. Inouye Solar Telescope, named after the late Hawaiian Senator, is being pieced together — and as construction images show, it’s pretty far along. It will stare at the sun from above tropical cloud level, at 10,023 feet atop Maui’s mellow volcano, Haleakala. Its primary mirror is nearly 14 feet across, and the protective enclosure it sits in is around 140 feet high and 84 feet in diameter. That’s huge.

Scientists will use this whopper of a solar telescope to better understand the unpredictable nature of the sun and its impulsive releases of charged particles, which can paralyze power grids on America’s Eastern Seaboard, wiping out power for a year.

NASA got clever and sent this 6,800-pound observatory into space, so it doesn’t have to peer through Earth’s atmosphere to snap pictures of the sun. SDO just entered its seventh year of sungazing, and although it consistently captures enthralling images of our sun, its primary purpose is to better forecast when the sun might eject powerful bursts of charged particles into space.

With unbounded ambition, next year NASA will launch an armored spacecraft, the Parker Solar Probe, into the sun’s searing outer atmosphere, where temperatures will be several times hotter than a pizza oven (2,500 degrees Fahrenheit). The front of the craft is fitted with an eight-inch-thick shield to protect the instruments on the craft from the sun’s wrath, which will take measurements of the charged particles zipping through the atmosphere, with the goal of better forecasting ruthless blasts from the solar wind. It’s similar to the Solar Dynamics Observatory, but it’s actually capturing bits of the sun.

This story has been updated to show data for the 2018 summer solstice.