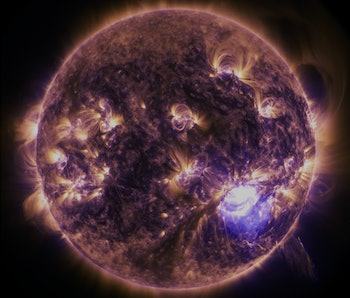 The Solar Probe Plus — the little bugger that NASA is shooting straight into the sun in the name of science — now has a new name: the Parker Solar Probe. Yet, the $1.5 million mission remains the same: jet off towards the sun to help teach us frail humans how we might better predict when solar storms begin to flare, in order to safeguard the modern world’s technology and infrastructure from instantly frying up and sending civilization back centuries.

In the 1950s the probe’s namesake, astrophysicist Eugene Parker, was told that his ideas about solar winds were “ridiculous.”

“When I wrote the first paper, it was open and shut,” Parker said during a NASA press conference Wednesday. In just four lines of algebra, Parker proposed that the sun was shooting charged particles into space at supersonic speeds. Like storms on Earth, the tempestuous space winds would affect things in their path, notably planets.

Today, scientists know that Parker’s unusual ideas about solar winds aren’t at all ridiculous, but rather a real, relentless phenomenon that affect nearly everything in the entire solar system. Hence the new name.

“I’m certainly greatly honored to be associated with such a heroic scientific space mission,” said Parker.

For Earth in particular, violent solar activity could wreak havoc on our power infrastructures. Knowing when these aberrations are likely could help us better prepare for situations where space weather starts to get stormy. Experts believe a single bad storm could result in $2 trillion worth of damage in the U.S. alone.

That’s why the July 2018 launch of the Parker Solar Probe — the first NASA spacecraft named after a living scientist — is so important. The probe will speed towards the sun’s searing outer atmosphere, called the corona. Armored with an 8-foot diameter shield, the Parker Solar Probe will venture 3.9 million miles from the sun’s surface, seven times closer than any previous mission. Temperatures will reach nearly 2,500 degrees Fahrenheit, hotter than terrestrial lava.

“I like to call it the coolest hottest mission under the sun,” said Nicola Fox, the mission’s project scientist at the Johns Hopkins University Applied Physics Laboratory, on Wednesday. “It’s going to provide critical information to enable us to better predict space weather.”

By sending the Parker Solar Probe into the sun’s atmosphere, Fox and her team hope to not only predict when the sun might spew a storm of charged particles at Earth, but also solve a simple, though baffling question: Why is the sun’s atmosphere (in areas closer to the sun) hotter than the sun’s surface? We’re talking about a difference of 3 million degrees Fahrenheit, versus a measly 10,000 degrees Fahrenheit. “Until you touch the sun, you really can’t answer these questions,” said Fox.

Parker, now 89, remains fully intrigued by our stormy star. “The sun is the primary puzzle in the universe,” he said.

More like this
Science
Feb. 5, 2023
What Mysteries is the Universe Hiding from Us? A Cosmologist Weighs In
By M. Mitchell Waldrop and Knowable Magazine
Science
Jan. 28, 2023
This concept spacecraft could swiftly send a one-ton spaceship to the edge of the Solar System
By Matt Williams and Universe Today
Science
Feb. 3, 2023
Look: Astronomers Find a Potentially Habitable Exoplanet With a Violent Past
By Kiona Smith
LEARN SOMETHING NEW EVERY DAY.
Related Tags
Share: