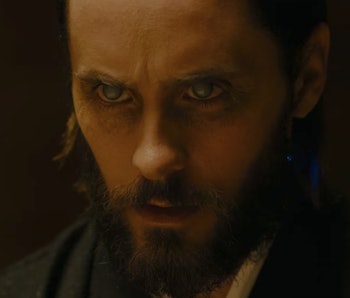 Jared Leto is looking a little more haunted than usual these days. A host of new featurettes for the upcoming sequel to Ridley Scott’s Blade Runner, Blade Runner 2049, were released on Thursday featuring short interviews with the cast and crew. One of the featurettes, the “Jared Leto Featurette” features a quick interview with Leto and a few, brief shots of him in-character.

The most notable of those shots is Leto glaring at something offscreen, his eyes toned a milky silver color.

Leto’s character, Neander Wallace, is one of the biggest mysteries of 2049, a project that’s nothing but mysterious. No one seems to know who — or what — he is, but it’s pretty clear that he’s a villain of some sort.

“I play a character called Neander Wallace — to be honest they had me at the name,” Leto told Evening Standard. “I read the script and fell in love with the character. But I don’t think I’m allowed to talk about it — I may have already got in trouble for telling you the name.”