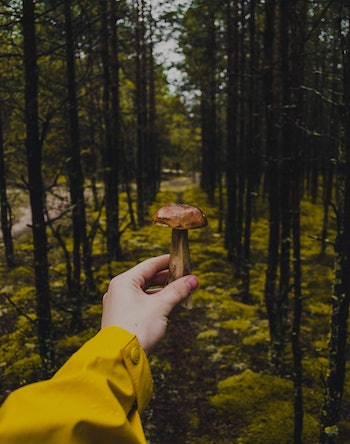 People have been altering their perceptions of reality for as long as there have been people, and in 2017, the newest and oldest tools for human transcendence are coming together: lately we’re eating psychedelic mushrooms to heighten or otherwise enhance our experience of virtual reality.

The relationship between people and psychedelic substances dates all the way back to prehistoric times. In his book Food of the Gods, notorious ethnobotanist and cultural critic Terence McKenna lays out his “stoned ape” theory of evolution, hypothesizing that hallucinogenic mushrooms were — back in the day — a staple food item, readily available from the ground. He suggests that these humble fungi acted as neurological lightning bolts, jumpstarting the brain development that saw Homo erectus turn into Homo sapien about 200,000 years ago.

McKenna’s suggestion is that psychedelics made the human mind modern. It makes at least a degree of sense: the digital, high-tech species that straps a virtual reality headset on its face was bound to first have a low-tech method for making the authentic world disappear. To put it reductively, you don’t get to the Oculus Rift without going through a few magic mushrooms first.

We’re alive at a time that we have access to both the new stuff and the old stuff, so what happens when these two perception-shifters tagteam each other? What’s it like to escape reality in analog and digital at the same time?

Alexandre Tomic, co-founder of Slotsmillion VR, the world’s first virtual reality casino, agreed to talk with Inverse on the record about combining psychedelics and VR.

“My most recent psychedelic experience in virtual reality was about 9 months ago,” says Tomic, who recalls using a virtual reality app by Google called Tilt Brush that lets users doodle in 3D space, and a horror video game.

“I ordered mushrooms from a Dutch website, ate them dry, then played Tilt Brush and admired the magical colors. After that, I played Alien Isolation and screamed like a 17-year-old girl.”

Tomic suggests that psychedelics work to make one’s experience of virtual reality more real. “The pixels are more prominent in virtual reality displays, so there’s often a grid- or matrix-like effect as you play. Mushrooms make this effect stronger, resulting in more hallucinations — you perceive the full environment as well as the grid that makes the environment possible. Super trippy.”

Our present-day relationship with psychedelics doesn’t much resemble that of our stoned ancestors. This category of drug — we’re talking LSD, mushrooms, MDMA, and the like — is federally classified as a Schedule 1 controlled substance, a family that includes heroin. Though psychedelics are federally criminalized, medical research professionals acknowledge them as bursting with potential for treating victims of trauma, PTSD, and other disorders.

See also: Why a soap company is investing millions to study MDMA’s effects on PTSD

“Psilocybin has been shown to be safe and non-addictive,” says George Greer, medical director of the Heffter Research Institute. Greer’s organization has been the primary funding body for psilocybin research throughout Europe and the United States for more than 20 years, making a mission to study psilocybin’s applications “for cancer distress and addiction with the highest standards of scientific research.” He’s even done a Reddit AMA about his work.

“Early results indicate that, when used with medical screening and therapeutic support, [psilocybin] could be more effective at treating some significant psychiatric diseases than existing pharmaceutical approaches, and without having to take a medication every day,” Greer tells Inverse. “A single treatment has improved symptoms for months.”

Virtual reality has also demonstrated therapeutic efficacy since the early 1990s. Ralph Lamson of the Kaiser Permanente Psychiatric Group cured his own acrophobia with VR technology between 1994 and 1995, then set up a scientific study to try to do the same thing with 40 study participants; 38 of them showed significant improvement.

See also: The scientific difference between LSD and mushrooms

Because VR technology figuratively enables you to go anywhere and do anything, exposure therapy becomes completely safe. However scared you may be as a virtual spider crawls toward you, or as you peer over a steep virtual ledge, nothing inside of VR goggles can actually touch your body or harm you. The Heffter research team holds that psychedelics’ unexplored potential requires careful scientific study before they can be elevated to the status of mainstream medicine.

This careful scientific study is also being carried out by the Multidisciplinary Association of Psychedelic Studies, a Santa Cruz, California-based non-profit whose research focuses on 3,4-methylenedioxymethamphetamine, better known as MDMA. This substance “has the greatest promise for PTSD, and we believe that it has the greatest chance to be approved by the FDA soonest among all psychedelics,” Brad Burge, communications director for MAPS, tells Inverse.

“I think the use of VR to help cultivate a therapeutic setting could be quite valuable in the applications of psychedelic medicine,” Merete Christiansen, executive associate at MAPS, tells Inverse.

There’s also the government: the Department of Defense has been actively funding virtual reality therapy research for soldiers returning from war. There’s no word yet about the DoD combining VR and MDMA, although research into using MDMA to treat post-traumatic stress disorder has a number of backers.

Tomic, the virtual reality casino operator, contextualizes his VR trips as an experiment in user interfaces.

“We know when applications make information visual, that information speaks more directly to your brain. Mushrooms plus VR means we can create the interface to display this information, and give our brains the ability to see patterns that you couldn’t see before,” he tells Inverse. “You become able to relate things that seems completely unrelated.”

Virtual reality and psychedelic drugs both have associations with nonproductive, pleasure-seeking behavior, but Tomic says this mentality should not figure into your VR trips. He specifies that does this home by himself, in a work context. “I’m working on myself, not doing it recreationally. When you’re young, you seek pleasure. When you’re old, you seek happiness. Then you start looking for meaning, because you understand that happiness is a byproduct of meaning.”

“Pleasure is for losers,” says the virtual reality casino entrepreneur.