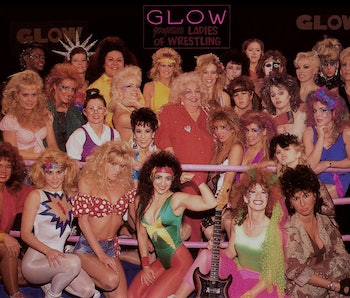 Thirty years ago, inside the Riviera Hotel on the Las Vegas strip, a roster of mostly struggling actresses and models entered a wrestling ring and battled for supremacy. They also rapped and danced and got up to all kinds of politically incorrect shenanigans, and audiences watching at home on Saturday mornings ate it all up.

This was the Gorgeous Ladies of Wrestling, an unabashed parody of men’s pro wrestling, with women front and center. Although it has long since stopped its weekly events and airing on cable TV, G.L.O.W. lives on as a kitschy classic, and the upcoming Netflix comedy based on its story may just catapult it back into the spotlight.

Created in 1986 as the brainchild of wrestling-obsessed TV producer David McLane and filmmaker Matt Cimber, G.L.O.W. existed outside the reach of formal governing bodies like the National Wrestling Alliance (NWA) or Vince McMahon’s budding World Wrestling Federation. Unlike other straight-faced wrestling leagues that did their darndest to maintain a facade of realism, G.L.O.W. behaved like a variety show with a serial format; G.L.O.W. had “seasons,” each consisting of storylines that began and ended in 26 episodes.

G.L.O.W. changed Ursula Hayden’s life forever. A fresh-faced high school grad when she auditioned for the league, Hayden was hired based on her athletic background in tennis and gymnastics which made her prepared for the in-ring action. “Living in Las Vegas was a major change, but an exciting one,” Hayden remembered during a recent phone call with Inverse. “It was like walking in a dream. The fans were incredible, they were growing and getting bigger. It was a very exciting time of my life.”

The whole enterprise was financed by casino magnate Meshulam Riklis, owner of the Riviera and a good friend of McLane’s. In its first two seasons, G.L.O.W. was produced inside Riklis’s Riviera until its third season, where it moved to a warehouse (now a Harley-Davidson dealer) three miles from the hotel.

Things ended abruptly in 1990 when Riklis suddenly pulled his funding for GLOW. The official word was that a combination of issues — both within distributor Independent Network Inc. and Riklis’s family — forced the financier to exit. (The documentary GLOW: The Gorgeous Ladies of Wrestling addressed the rumor that Riklis fooled around with the wrestlers, leading to a them-or-me ultimatum from his wife, but nothing was confirmed.) Whatever the case, G.L.O.W. was a hot show in the ‘80s, until it wasn’t.

Today, G.L.O.W. is owned by Ursula Hayden, one of the show’s former stars, who performed as the sultry Babe the Farmer’s Daughter. Since 2001, Ursula has mostly dealt with archiving G.L.O.W. episodes for a nostalgic audience. “First I dove into refurbishing old GLOW tapes I could get my hands on,” she tells Inverse. “I still don’t have all the episodes, which is unfortunate. I’m having some internal problems with that. But I got the tapes I could get a hold of transferred and found some really great footage of complete shows, so I re-manufactured and designed covers and started selling the DVDs.”

In the early 2000s, G.L.O.W. released DVDs through Allied Artists, and then through wrestling distributor Big Vision Entertainment until the latter’s disappearance in 2010. Big Vision, a reputable name among wrestling fans, produced G.L.O.W. DVDs into easy-to-collect releases. “They were awesome,” Hayden remembers. Today, fans can still order GLOW DVDs from Ursula herself on the official website.

Things were quiet all around the G.L.O.W. front until 2011 when a group of Houston-based filmmakers reached out to Ursula. They wanted to tell the story of GLOW through a documentary; Ursula turned them down at first, because they were “new kids on the block” and she didn’t trust just anyone with telling her wrestling family’s story.

The filmmakers — led by director Brett Whitcomb — later proved themselves with The Rock-afire Explosion, a documentary that explored the animatronic band that preceded the mascots of Chuck E. Cheese. “They kept my attention through the whole thing and I thought it was amazing. So I said, ‘Yeah, yeah you can take this and make an awesome documentary on it.’ The world was their oyster.”

Along with Hayden, another ex-G.L.O.W. girl named Angelina Altishin (who performed as the belly-dancing “Little Egypt”) helped the filmmakers get in touch with the other women and organized the film’s emotional reunion. The film, GLOW: The Gorgeous Ladies of Wrestling, debuted in 2012 to rave reviews and was named Best Documentary at the Comic-Con International Film Festival in San Diego. Eventually, the documentary made its way to Jenji Kohan, creator of Orange Is the New Black, and now there’s GLOW hitting Netflix on June 23.

There’s no word on an official, full-fledged G.L.O.W. revival. “We’ll see where it spins,” Hayden tells Inverse about the possible return of the revolutionary wrestling show. “It’s a very exciting time.”