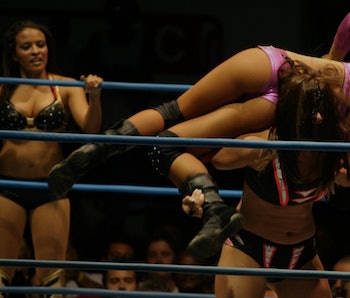 Netflix has ordered 10 episodes of a new comedy from executive producer Jenji Kohan, creator of Weeds and Orange is The New Black. G.L.O.W. follows an out-of-work actress who finds opportunity in a weekly series about female wrestlers in the ‘80’s wrestling league, G.L.O.W. — Gorgeous Ladies of Wrestling.

The world of women in wrestling is rich, and G.L.O.W. will likely draw from the stories of real-live female wrestlers as the series explores the realm of what Netflix describes as “big hair and body slams.” The tradition of kick ass-women in wrestling continues today, with outstanding female wrestlers like Shasha Banks, who prove that the wrestling sure as hell isn’t just a man’s world.

Since much of its creative leadership come from shows with outstanding female casts and characters, it’s a good bet that G.L.O.W. is going to fit right in with Netflix’s arsenal of original series that showcase female talent in front of and behind the camera.