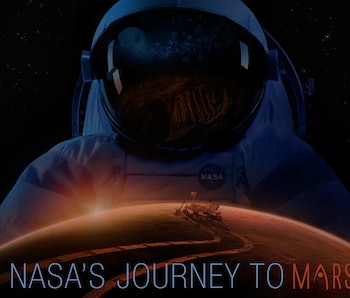 The first colonists on Mars will be tasked with flying a massive spacecraft to the planet, landing safely, laying the groundwork for a future civilization, conducting vital scientific research, and getting back to Earth. But, lurking between those stressors will be something much more cynical: radiation.

Earth has a strong magnetic field and dense atmosphere that protects humanity from harmful radiation. But in deep space, astronauts will be openly exposed to the galactic cosmic rays that travel through the universe from distant stars. These rays can cause severe tissue damage to humans, creating a host of health issues and even shortening life expectancy.

NASA is seemingly doing everything it can to reduce these risks for the future Mars astronauts. But, radiation and space physics expert Francis Cucinotta, former NASA researcher, has reworked the radiation estimates and found that the risk is astronomically worse than NASA engineers are currently preparing for, putting astronaut’s health in danger and jeopardizing the greatest feat of human ingenuity this planet has ever seen. His work was published in the journal Nature in April.

Cucinotta, now a researcher at the University of Nevada, Las Vegas, tested healthy mice using a non-targeted effect model to irradiate every cell—mimicking the constant radiation an astronaut would receive in deep space to and avoid the bystander effect that happens when healthy cells receive signals from cancerous cells, causing them to mutate. This creates a domino-effect throughout the body, leading to metastatic cancer and ultimately death. By avoiding a bystander effect, Cucinotta found that the constant dosage of galactic cosmic rays would result in a two-fold higher risk of cancer than previously thought.

“We already knew that radiation from cosmic rays was very damaging because it creates more complex types of DNA damage, lots of mutations,” Cucinotta tells Inverse. “But through this mechanistic study we discovered how large of a contribution the bystander effect can have to the entire body.”

Cucinotta concluded that the cancer risk for astronauts on a 900-day mission to Mars — 200 days there, 500 days on the planet, and 200 days back — would be dramatically high.

In line with Cucinotta’s results, radiation estimations are based off of what we already know and gathered from preliminary mouse studies, Mars rover data, nuclear disasters, and health testing from astronauts aboard the International Space Station, like Scott Kelly, who are still shielded by Earth’s magnetic field. This information is gathered by third-party organizations like the ICRP (International Commission on Radiological Protection) and the NCRP (National Council on Radiation Protection and Measurements), which NASA refers to for its own estimations.

“The ICRP and NCRP go over the latest scientific and medical data about radiation damage to humans and they try to come up with radiation limits, that is, how much radiation a human can safely have in their system,” Sheila Thibeault, a materials researcher at NASA’s Langley Research Center, tells Inverse. “So, we do not set out own limits, we go by these other recommending bodies.”

Cucinotta’s results may put quite a damper on mission plans. But, the scientific community has had mixed responses. In a fiery statement, Robert Zubrin, aerospace engineer and founder of The Mars Society, called Cucinotta a “radiation huckster” and that there is nothing new to be learned from his paper.

“Galactic cosmic radiation is not a show-stopper for human Mars exploration and should not be used as an excuse for delay,” Zubrin states. “It is understandable that radiation researchers should want to justify their funding, but they should not spread misinformation to promote themselves at such extraordinary expense to the public.”

But, NASA has gone to Cucinotta’s defense: “Cucinotta is a product of NASA; he is not slowing things down and his research should be taken seriously,” Thibeault says.

However, Thibeault counters that Cucinotta’s estimates do not appear to take into account the innovations NASA has come up with to prevent at least some of the exposure from galactic cosmic rays. There are several methods for radiation shielding, both within the spacecraft and on the red planet — the surface and thin atmosphere block about 40 percent of radiation — such as the Mars Ice Home project, which would be an inflatable dome habitat that will be constructed on the surface. The home will be filled and shielded with water that turns to ice to reduce radiation exposure and allow for a comfortable living arrangement for Mars astronauts.

Other ideas include drilling and building the habitat underground and cleverly distributing supplies throughout the ship so that they absorb some of the radiation. The trip to and from the planet can also be reduced drastically from 900 days if NASA chose a launch window where the planets were closest to each other.

“We can cut down on the dose if we take all of these other things into account,” Thibeault says. “Our preliminary calculations to date show we can get there; there is hope.”

NASA has made radiation a high priority but all of its efforts could result in humans never getting to Mars, at least, not in the 2030s timeframe. “Our plan is to launch healthy people and bring them back healthy. We won’t send them until we can make sure it’s safe.”

As Cucinotta stresses in his paper, there are too many variables to make absolute estimates, so there is a strong need for more research. “The clock is ticking, we have to find the answers to make it a lower risk before it’s too late.”

Abstract: Cancer risk is an important concern for galactic cosmic ray (GCR) exposures, which consist of a wide-energy range of protons, heavy ions and secondary radiation produced in shielding and tissues. Relative biological effectiveness (RBE) factors for surrogate cancer endpoints in cell culture models and tumor induction in mice vary considerable, including significant variations for different tissues and mouse strains. Many studies suggest non-targeted effects (NTE) occur for low doses of high linear energy transfer (LET) radiation, leading to deviation from the linear dose response model used in radiation protection. Using the mouse Harderian gland tumor experiment, the only extensive data-set for dose response modelling with a variety of particle types (>4), for the first-time a particle track structure model of tumor prevalence is used to investigate the effects of NTEs in predictions of chronic GCR exposure risk. The NTE model led to a predicted risk 2-fold higher compared to a targeted effects model. The scarcity of data with animal models for tissues that dominate human radiation cancer risk, including lung, colon, breast, liver, and stomach, suggest that studies of NTEs in other tissues are urgently needed prior to long-term space missions outside the protection of the Earth’s geomagnetic sphere.