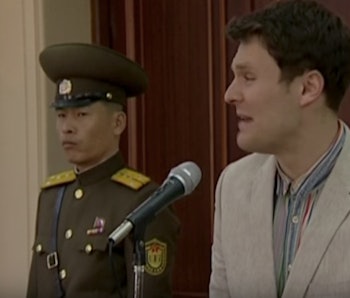 After being detained in North Korea for 17 months, University of Virginia student Otto Warmbier is heading home. Warmbier, who was imprisoned in 2015 for tearing down a propaganda poster during a visit, has been in a coma for over a year. According to an official North Korean report obtained by the Washington Post, the American slipped into a coma last year after he contracted foodborne botulism and was given a sleeping pill. Warmbier never woke up.

While we aren’t sure that the North Korean report is entirely factual, one thing is clear: People with botulism shouldn’t be taking sleeping pills.

When Inverse asked Benjamin Chapman, Ph.D., a public health researcher and expert on foodborne illness at North Carolina State University, why a person with botulism would be given sleeping pills, he replied, “I don’t know. It seems really surprising.” Treatment for botulism, a disease characterized by muscle paralysis caused by the presence of botulinum toxin in the body, normally involves swift administration of an antitoxin, which binds and disarms the toxins in the body.

Botulinum toxin is secreted by the bacteria Clostridium botulinum, which sometimes gets into improperly canned food. The toxin paralyzes a person’s voluntary and involuntary muscles, leading, in less severe cases, to temporary facial drooping, blurred vision, slurred speech, and difficulty swallowing. It doesn’t usually lead to unconsciousness, but when it’s at its most deadly — due to huge amounts of toxin — it paralyzes the muscles that control a person’s breathing. Thus, people with severe poisoning are already at risk of falling into a coma, which occurs when the brain is starved of oxygen.

Why, then, did Warmbier receive a sleeping pill?

“Sleeping pills aren’t used to treat botulism,” Chapman reiterates. He speculates that the pills could have been provided for comfort during recovery, as they would in many types of medical treatment, but he thinks that even this is unlikely.

“I’m skeptical about whether he had botulism. Botulism is really uncommon,” he says, conjecturing that the North Korean report could have included a “translation issue, where food poisoning equals botulism.” Other types of foodborne illness, such as poisoning from Shiga toxin-producing E. coli or serious cases of Salmonella or Listeria infection, he notes, could have also caused Warmbier to become very sick. ‘There are definitely cases where people get so sick that they are put into a coma state, medically, so their bodies can [better] respond to it,” Chapman says. Could North Korean doctors have put Warmbier into this state?

Why Was Otto Warmbier Detained in North Korea?

It’s as unclear as it is unlikely. Chapman points out that, given what we know, there’s no indication that either the sleeping pill or the supposed botulism event caused the coma. For all we know, he says, “it could be the illness itself that’s causing the coma.”

Botulism, which is fatal only in 3 to 5 percent of cases, is classified as “rare” by the World Health Organization. Still, outbreaks occur: In late May, a Northern California man fell into a coma after contracting botulism from tainted nacho cheese. He was put on a ventilator in a hospital, but he died two days later. Warmbier has apparently been in a coma state since a little after his last public appearance in March 2016, which is when he is said to have contracted botulism and taken the sleeping pills. Whether this report is true or not — and whether he will ever awaken from his coma — only time will tell.

More like this
Science
5.14.2022 12:30 PM
Omicron subvariants: An epidemiologist answers 5 essential questions
By Louis Jacobson and Kaiser Health News
Science
5.27.2022 10:00 AM
The surprising way psilocybin alters the brain’s chemistry to treat depression
By Clare Tweedy and The Conversation
Science
5.16.2022 10:00 AM
Pig-human heart transplants still have a long way to go
By Andrew Fenton, The Conversation and Françoise Baylis
Related Tags
Share: