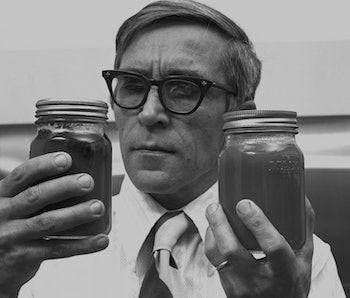 On Monday, Martin Galindo was removed from life support. The Northern California father died from a case of botulism, apparently brought on by nacho cheese purchased at a local gas station on May 5.

Botulism — caused by toxic waste from the bacterium Clostridium botulinum — is to blame for Galindo’s death and the hospitalization of nine others. And while botulism is rarely fatal — it only kills in 3 to 5 percent of cases — it’s still pretty gnarly.

The California Department of Health confirmed Monday that nacho cheese at Valley Oak Food and Fuel contained the toxin that causes botulism. The foodborne illness, which is quite rare in the United States these days, is most often caused by home-canned foods whose containers have not been properly sterilized. Typically these are low-acid foods such as green beans, asparagus, and corn. While less common, it can also come from contamination during manufacturing, as appears to be the case with the gas station nacho cheese in California. You can’t see, taste, or smell botulism in contaminated food.

According to the U.S. Centers for Disease Control and Prevention, symptoms of botulism typically appear within 18 to 36 hours after consuming contaminated food; these symptoms include blurred vision, slurred speech, difficulty swallowing, and muscle weakness. If the illness is not treated with an antitoxin to prevent the botulinum toxin from circulating in the patient’s blood, they can experience paralysis and respiratory failure. This occurs because botulinum toxin blocks the release of acetylcholine, a neurotransmitter that allows nerves to communicate with muscles. As the toxin spreads, paralysis worsens.

Even if treated, patients may need to remain on a respirator for weeks or months, and can experience long-lasting fatigue that requires ongoing therapy to overcome.

Botulism may sound frightening, but it’s relatively easy to protect yourself. If you can food at home, follow the CDC guidelines and boil any home-canned foods for at least 10 minutes before serving. The CDC also recommends that you keep garlic- or herb-infused oils refrigerated, and that you either keep potatoes baked in foil hot until served or refrigerate them. In short, keep your food out of the “danger zone,” between 40 and 140 degrees Fahrenheit.

And despite all precautions, people can still contract botulism from unexpected places. If you suspect you have, go to the doctor immediately.

“While there are still unanswered questions about this outbreak, these tragic illnesses are important reminders to be vigilant about food safety,” says CDPH Director and State Public Health Officer Dr. Karen Smith in a press release. “As we head into the summer barbecue season, both indoor and outdoor chefs need to be on guard against all foodborne illnesses.”

More like this
Science
6.28.2022 10:00 AM
How are drugs absorbed in the body? The science of medicine, explained
By Tom Anchordoquy and The Conversation
Science
6.26.2022 11:00 PM
The powerhouse of the cell has a more complicated origin than we thought
By Viviane Callier and Knowable Magazine
Mind and Body
7.2.2022 3:00 PM
Why does spicy food make you sweat? A neuroscientist breaks it down
By Elana Spivack
Related Tags
Share: