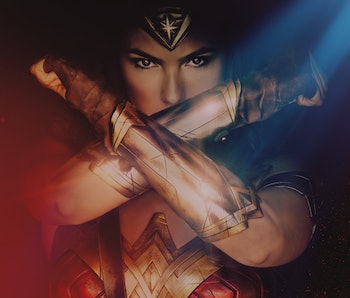 As the world bore witness to the rise of Wonder Woman, played by Gal Gadot in Patty Jenkins’s new movie, fans and critics alike cheered raucously. Here she was, finally, a truly inspiring superheroine depicted on the big screen, crossing the trenches of World War I, standing up to a trench-filled machine gun-firing Germans and kicking ass.

“Patty and I always talked about that moment in the trench; we wanted to feel rising tension until the moment she climbs out, and there would be this huge relief,” says the film’s cinematographer Matthew Jensen, whose previous works include Chronicle and Game of Thrones, in a phone interview with Inverse. “I think that’s what people are responding to, that this woman is deciding to take on overwhelming odds, knowing she could get hurt, but she perseveres with extraordinary strength. That’s what we were trying to convey.”

While most of Wonder Woman was shot with Panavision’s Millennium XL camera, “which is decidedly old-school,” the filmmakers also used digital cameras like the Arri Alexa (for underwater scenes) and the Phantom for the slow-motion action. “We needed to shoot 500 frames a second. That’s the only camera that can do that,” Jensen says. Wonder Woman is undoubtedly Jenkins’s vision, but the action did borrow from fellow DC filmmaker Zack Snyder’s aesthetic for a reason.

“Patty loves Zack’s style and his use of slow-mo,” he says. “She thought it was appropriate to show Wonder Woman’s grace and athleticism. Slow-mo was the only way to capture that. It’s not just whatever looks cool or if it’s a neat explosion. She’s trying to tell stories within the action.”

But while Wonder Woman took inspiration from other DC directors, its filmmakers also sought to be as unique as possible. Jensen contrasts the action of Wonder Woman to 2005’s Batman Begins, shot by the legendary Wally Pfister, to explain how movies should reveal character. “Batman’s style is so fast you can’t keep up with it, and that’s in tune with the character who is stealthy,” he says. “Wonder Woman is beauty, grace, and extreme athleticism. We didn’t want to be too fast that you couldn’t see the ballet of it.”

Although Wonder Woman is embedded in the nihilistic DC Extended Universe and narratively tied to other movies, the filmmakers enjoyed a great deal of freedom to establish their style. “They trusted us, and once they started seeing the dailies they were over the moon with what we were doing,” Jensen says of their relationship to Warner Bros. Their freedom was expressed in the movie’s vivid palette, which critics praised for “bringing color back” to the genre.

Themyscira, her island home, is a paradise, “so we wanted it to be lush and green and for you to feel the sun” with a population of “healthy, bronzy Amazons.” Inspiration came from not just the comics but also a perfume ad. “A Dolce & Gabbana ad Patty really liked seemed to capture that. It was their cologne, “Light Blue,” that she looked at as a model. Really, the idea was beautiful skin tones surrounded by lush environment.”

“Patty wanted to make a colorful movie, and so it was my job to deliver that for her,” Jensen adds. “I tried to find this balance in the color of having a cooler cyan-y color in the shadows and a lot of warmth in the highlights.” Although Jensen says pulling that off was “tricky,” help came in from the abundant Italian sun. “We had blue skies and sunlight, beautiful sand’s light bounces off and warms the faces. I had a lot of elements working for me.”

Jensen and Jenkins also closely consulted the latest era of comic books. “I did look at the New 52 Wonder Woman. It’s a modern sensibility, and I wanted to see how the character had been updated, how she was drawn, and the use of color,” he says. “I did look at that, because it’s important to go back to the source material and see new interpretations, because there’s such a history with this character.”

Of course, being film geeks, other films were considered in the making of Wonder Woman. Bearing “similar tastes” with the director, their talking points included Richard Donner’s Superman (the alleyway fight is an obvious homage), Skyfall and True Grit (both shot by Roger Deakins, whom Jensen studied for his use of light), Michael Clayton (which Jensen said was “random”), Casablanca (“I think you feel that when Diana and Steve are saying goodbye”), and Steven Spielberg’s Raiders of the Lost Ark. “I was nine years old when I saw it,” Jensen says of the first Indiana Jones movie. “I remember it was this huge pop culture event and it rippled through in a lot of the ways Wonder Woman is rippling, which is amazing to come full circle, that I’ve made an adventure film.”

Wonder Woman is in theaters now.