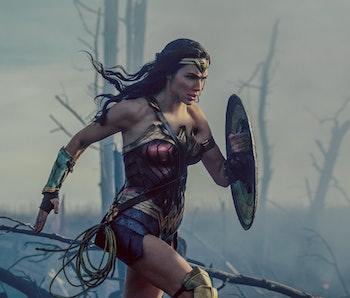 At last, one of the world’s most iconic superheroes has her own movie — and the reviews are in. Reviews of Patty Jenkins’s Wonder Woman, which started pouring in on Monday evening, have been overwhelmingly positive, praising the film’s uplifting optimism and heroism of the iconic character. As it hits theaters amidst an overwhelmingly cynical socio-political climate, many critics are praising Jenkins’s movie as the superhero “we desperately need right now.”

In Wonder Woman, the fourth film in Warner Bros.’ interconnected DC Extended Universe franchise, battle-ready Princess Diana of Themyscira (Gal Gadot) matures into a hero when she leaves her isolated paradise of warrior women and into the trenches of World War I. Although Wonder Woman already made her big-screen debut in last year’s bleak showdown, Batman v Superman: Dawn of Justice, Wonder Woman is the Amazon’s chance to shine in her own period action-fantasy, set a century before Man of Steel.

Common points of praise for the new movie center on its wildly diverse tone — it’s both epic and funny — as well as Gadot’s performance as Diana, a fish-out-of-water in 20th century London who manages to amuse as well as inspire those around her, and those in the theater.

One particular sequence — in which a fully costumed Diana begins her battle — was noted by Alison Wilmore of BuzzFeed as a stand-out moment. “It’s the kind of sequence that can give you goosebumps and provoke a few tears — Wonder Woman emerging from the trenches to save the day,” Willmore writes. “She has the staunchness of someone who sees the world in neat black and white…until she’s forced to consider whether she still feels invested in a humanity capable of doing harm without the influence of a god.”

Ashley Spencer of TheFix was also moved by Wonder Woman: “And when she crossed a battlefield, calmly deflecting machine gun fire with her wrists, tears streamed down my face – not out of sadness or distress at her plight, but born of an unexpected gratitude for this Wonder Woman’s mere existence. That’s the thing about representation: Sometimes you don’t realise how badly you’ve been missing it until it’s finally there, staring triumphantly back at you.”

Kristy Puchko of Comic Book Resources is also in praise of Wonder Woman, calling it “monumental” and “far and away the best DCEU movie yet.” She also writes glowingly of the same sequence: “With smoke whirling around her, soldiers trembling in a foxhole beneath her, Wonder Woman comes into her own, dashing into battle, her armor glinting in the dying light of day, her hair flowing in the breeze she builds with her speed, her smile beguiling and intimidating. A movie moment grand and gorgeous, it’s sure to have fans cheering and tearing up. It’s the kind of cinematic grandeur we wish for every summer. (Full disclosure: I was so overcome I cried.)”

IndieWire’s Kate Erbland, who gave the film an A-, echoes previous statements, with special attention to the cast, whose chemistry lends the film an undeniable charm. And Erbland, too, found the film inspiring. “Wonder Woman is as much about a superhero rising as it is about a world deserving of her,” Erbland writes, “and Diana’s hard-won insistence on battling for humanity (no matter how frequently they disappoint) adds the kind of gravitas and emotion that establishes it as the very best film the DCEU has made yet.”

Meanwhile, Alicia Lutes of Nerdist liked the movie but was critical of the third act and the handling of Steve Trevor (Chris Pine), the American pilot and love interest of Diana. “I understand the impulse to—since you’re subverting all the tropes—go whole hog with Steve Trevor as The Motivating Love Interest,” Lutes writes, “But at the same time, the way it was handled (edited?) felt frustrating when juxtaposed with Diana’s singular strength and drive … It’s something I can’t help but feel is inextricably linked to a need to make strong women attractive to men and a male audience.”

Still, Lutes says Gadot and Pine’s chemistry is “flat-out delightful,” and that Wonder Woman is “head and shoulders above every other DC/WB outing” and “a force with which to be reckoned.”