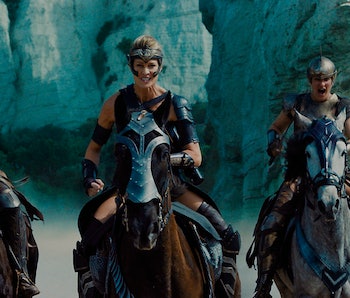 As a little girl on her paradise island of Themyscira, tiny Wonder Woman kicks, punches, and squeaks happily to herself while watching her aunt Antiope (Robin Wright) train soldiers.

The Amazon army she admires comprises not only women of color and Caucasian women, but soldiers whose bodies range from formidable walls of muscle to ethereal-looking, nimble archers. This multi-cultural, physically diverse Themyscira is a new development for DC Entertainment, though Patty Jenkins’s film didn’t invent it.

“Amazonian beauty is what they create” DC Comics artist Nicola Scott tells Inverse. “They see each other as beautiful.” In Scott’s Wonder Woman comics, which she co-created with Greg Rucka as a part of DC’s full-scale reinvention in 2016, the Amazonian army is made up entirely of women in peak physical condition. “We wanted different body types in [Diana’s] city, not just ethnic diversity, but body type diversity,” Rucka adds.

The soldiers in DC’s Wonder Woman comics and the 2017 film, then, aren’t all 5’10” with hourglass figures and long, meticulously-curled hair. (Venelia, played by Victoria’s Secret supermodel Doutzen Kroes, is that “type”, but Kroes is also a skilled equestrian.) The Amazons as DC has redefined them in 2017 are archers without large breasts, or they’re physical juggernauts with linebacker shoulders. They’re the long-legged cavalry, but they’re also muscular foot-soldier “grunts”. Some women choose to cut their hair completely off and others tie it back in Viking-style braids.

“They share a sense of beauty and aesthetic that they’ve developed over thousands of years,” Scott says, “and their daily tasks have been elevated into a high art.” DC’s Amazonian army is a group of women focused on function over form, and that comic book visual bleeds directly into 2017’s Wonder Woman film.

For months before cameras began rolling on Wonder Woman, the Amazonian army trained together as a functional team. As Madeleine Vall Beijner tells Entertainment Weekly, “The trainers said they wanted us to look like the female version of 300.” Those cast as Amazons who were familiar with hand-to-hand combat learned swordplay, archery, and equestrian skills.

When describing the Amazons as DC defines them in Rebirth and beyond, Greg Rucka says these women are hard workers before anything else. Despite all the gifts their gods gave them — Hippolyta explains these to young Diana at length in the film — they aren’t simply handed things for no reason. “We call it paradise island,” Rucka says, “but what does that world mean? What’s paradise? The gods give [the Amazons] tools they need in order to get what they need. The gods gave them the opportunity. The shorthand version I use to explain it all is that no Amazon wakes up and says, ‘Boy, I’d love to have a bottle of wine’ and then one appears from Zeus. But, she can plant the vineyard and harvest the grapes and make her own wine, because the soil is fertile on Themyscira.” In short, Amazonians are not, as UFC fighter Ronda Rousey once controversially said, “do nothing bitches”.

DC’s major changes to Themyscira aren’t limited to the way its soldiers appear; in Wonder Woman, we watch Hippolyta and her sister Antiope debate whether a war among mankind is worth endangering their people, and it’s implied that not every citizen of Themyscira is a trained soldier. Many inhabitants of the island are simply townspeople, or else they’re senators and political leaders. That’s a recent invention as well; Rucka and Scott developed a complex society for Themyscira based in open communication and healthy conflict.

“Amazons argue with each other, they fight with each other, but they don’t murder each other,” Rucka says. He says murder on Themyscira would suggest a flaw in the island society which doesn’t exist. However, the society of women being “flawless” doesn’t mean it’s devoid of conflict or drama. “That’s like saying anyone who gets married is instantly boring,” Rucka laughs. “You have to look at it with a different view. There’s a direct reward from their labor because their environment was given to them by the Gods, but that doesn’t mean their society doesn’t function through complex systems. To suggest otherwise is rooted in sexism,” he says, perhaps alluding to early depictions of Themyscira, in which Diana and her people simply lounged around in revealing clothing. “It’s a benevolent monarchy in which the people have a voice,” Scott adds. When Hippolyta discovers that her sister has disobeyed an order in Wonder Woman, she’s more disappointed in herself than angry. “What kind of queen am I,” she asks, rhetorically, wondering why her people would ignore her word.

The film even hints at Rucka and Scott’s invented Amazonian science and innovation when Steve asks Diana a series of panicked questions, including, “What does your water look like that?” Scott says she and Rucka had to develop a version of science that felt both fantastical and logical. “We obviously needed science on Themyscira to be very different than what we consider science. It’s had to be women creating what they needed for their island, which means they aren’t creating weapons, but tools for sustainability. They’re focused on health and wellness, not destruction.” Through this lens, we can understand how Diana learning about Dr. Poison’s mustard gas is such a horrifying perversion of the systems she understands. In her world, chemistry is used to improve people’s lives; not end them.

“Our theory became that there’s no circuitry on the island, but they’re using natural science, meaning gravity and magnets and stones, and the sun and such to create great advances and innovations. What they use to heal Steve Trevor’s wounds is essentially a stem-cell plasma which, under a sun-intensifying lens carved out of a purple crystal-like rock, polished to a specific curvature and aimed at the plasma bath he’s, has an incredible healing factor.” Scott and Rucka’s version of Amazonian science isn’t explained explicitly in the film, but the sets on Themyscira are built to suggest that Steve is being healed by a system unfamiliar to mankind.

See also: Wonder Woman is proof that the reign of “dark and gritty” superhero films needs to end.