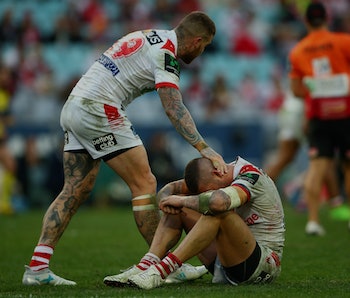 When you friend tells you about their awful day, how do you feel? You may be overcome with compassion, or you may share their stress. Actually, it’s probably both, because your brain is hardwired to flood you with these feelings of empathy whenever someone you cared about suffers.

Research published in Neuron this Thursday has revealed for the first time exactly which parts of the brain generate these feelings and how this brain activity might manifest in people’s behaviors.

It turns out that empathy can be broken down into two distinct feelings: empathic care and empathic distress. Yoni Ashar, a doctoral candidate at University of Colorado Boulder who sought to combine his computer science and religious studies background into experiments on the neural basis of people’s values, explains to Inverse that empathic care is “a warm tender feeling like a parent might have for a child,” and empathic distress is “a feeling of aversive, negative arousal which we feel when someone is suffering.”

In his new paper, Ashar linked very specific parts of the brain to both of those feelings, which researchers had previously thought came from the same place. In reality, empathic care is related to activity in the nucleus accumbens and medial orbitofrontal cortex, two regions of the brain related to reward and higher executive function, respectively. For example, when mother rats were near their children, their nuclear accumbens activity was off the charts. This makes sense, given that empathic care is generally rooted to the feeling that you value the person who is suffering.

On the other hand, empathic distress was closely related to activity in the premotor regions of the cortex, in which our mirror neurons are found. These neurons are what allow us to feel other people’s pain through a compulsion to mimic their behavior and their emotions.

“One theory of why we feel distress is that we are mirroring their experience or taking on their distress, and our results are consistent with that theory,” Ashar tells Inverse.

To match up emotion with brain region, Ashar put people inside an fMRI machine and recorded their brain’s activity while reading them true stories of people who had suffered. While using a machine learning system to trace patterns of neural activity, Ashar compared the fMRI results with reports of how the participants felt during different parts of the story as well as with how a larger group of people who weren’t scanned in the fMRI felt during the same stories.

“We found patterns that could predict how intensely they were feeling empathic care and empathic distress,” Ashar tells Inverse.

The research showed that the harder a particular brain region worked, the more intensely that person felt empathy for the subject of the story. Also, those that had higher brain activity reliably gave more money when asked to donate to the stories’ subjects after the experiment.

Ashar told Inverse that what he really wants is to find ways for his research to help people in everyday life, and he was willing to speculate a bit on how that might happen down the road as he continues to improve on his work. Ultimately, he sees this new distinction between empathic care and empathic distress as a tool that can help people cope with sad experiences and better nurture their relationships.

“When we encounter someone who’s suffering, we can reflect on how we’re engaging with them,” Ashar tells Inverse. “It’s possible that empathic distress is more linked to burnout and avoidance, while care is more linked to connecting with people and feeling warmth and compassion.”

He also hopes that once our understanding of empathy progresses, hospitals might be able to use the biomarkers he found to measure how empathetic its doctors and nurses are acting while working with patients. While this could improve the patient experience, it could also help doctors and nurses, particularly those who tend to respond with empathic distress, keep from burning out during their shifts.

While these sorts of potential applications are still off in the future, Ashar has already continued his work. He’s already collected data on whether a guided meditation session could help people respond with more empathic care than distress. While Ashar is still analyzing his data and couldn’t speak to the definite results, he tells Inverse that people who meditated reported that they feel more empathic care than distress afterwards.

As these emotions are becoming better understood, it’s important to remember that empathic distress isn’t a bad thing — it can provide people with a great tool for relating to the pain and problems of others. When Ashar says he wants to help people shift towards greater empathic care, he means that he wants to keep people from feeling distressed all the time. As he tells Inverse, “Too much negative arousal doesn’t feel good.”

Abstract: Encountering another’s suffering can elicit both empathic distress and empathic care — the warm desire to affiliate. It remains unclear whether these two feelings can be accurately and differentially predicted from neural activity and to what extent their neural substrates can be distinguished. We developed fMRI markers predicting moment-by-moment intensity levels of care and distress intensity while participants (n = 66) listened to true biographies describing human suffering. Both markers’ predictions correlated strongly with self-report in out-of-sample participants (r = 0.59 and r = 0.63, p < 0.00001), and both markers predicted later trial-by-trial charitable donation amounts (p < 0.05). Empathic care was preferentially associated with nucleus accumbens and medial orbitofrontal cortex activity, whereas distress was preferentially associated with premotor and somatosensory cortical activity. In tests of marker specificity with an independent behavioral sample (n = 200), the empathic care marker was associated with a mixed-valence feeling state, whereas the empathic distress marker was specific to negative emotion.

More like this
Science
Sep. 24, 2022
Is a fact always true? A philosopher explains how to spot the difference
By Peter Vickers and The Conversation
Science
Sep. 28, 2022
In a first, scientists show that dogs can smell when humans are stressed
By Elana Spivack
Science
Sep. 25, 2022
Why do cats love cardboard boxes? Pet experts decode the obsession
By Tara Yarlagadda
Related Tags
Share: