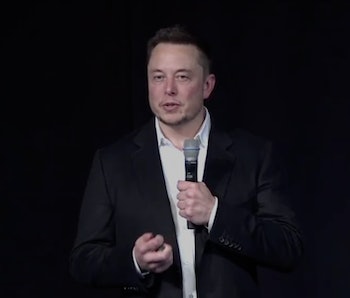 Tesla’s taking off at the stock exchange, but the vehicles themselves are staying firmly on the ground for now. At the company’s annual shareholders’ meeting on Tuesday, CEO Elon Musk hinted that a Tesla plane could happen one day — but right now, you’re probably better off looking elsewhere.

The problem, he explained, is that the energy density required to power an electric plane hasn’t quite advanced enough yet. At a minimum, you would want around 400 watts of energy per kilogram of plane. But even that would require major innovation in airframe technology if the plane had any hope of achieving a desirable range. The ideal amount of energy is around 500 watts per kilogram.

It’s not the first time Musk has suggested Tesla could make an electric plane. In fact, Musk suggested the idea as far back as 2009. With Tesla’s ongoing projects, alongside other Musk ventures, the plane idea has been pushed aside.

“Well I have been thinking about the vertical takeoff and landing electric jet a bit more,” he said during a February 2016 question and answer session. “I mean, I think I have something that might close. I’m quite tempted to do something about it.”

A number of competitors are also working on the idea. Uber outlined how a vertical takeoff and landing service could integrate into its ride-hailing app to provide faster travel city-to-city than ever before:

Tesla has a lot on its plate right now before it can think about catching up with these efforts. The company is planning to start producing the $35,000 Model 3 vehicle next month. After that, the company has plans to develop a Model Y sports utility vehicle and a Tesla Semi truck.

But when could we expect to see a Tesla plane in the skies? That all depends on the rate of progress in air technology.

“I don’t know, I think we are maybe four years or five years away from having 500 watt hours per kilogram,” Musk said during the investor meeting. “Something like that, maybe half a decade in volume production.”

More like this
Innovation
8.15.2022 2:00 PM
Tesla software updates reveal a potential roadblock to electric vehicles’ expansion
By Vivek Astvansh and The Conversation
Innovation
8.8.2022 10:00 AM
A wild new plane-train hybrid could whoosh you to your destination — if it can get off the ground
By Molly Glick
Entertainment
8.5.2022 12:30 PM
For All Mankind Season 3’s space mogul is better than Elon Musk — here's why
By Ryan Britt
Related Tags
Share: