Uber has big plans, and they involve taking to the skies. On Thursday, the company published a white paper (view it below) on flying cars, promising to boldly go where no ridesharing service has gone before. The vertical take-off and landing (VTOL) vehicles won’t need new roads, can fly straight to their destination, and will run with zero operational emissions due to their electric propulsion system.

“Imagine traveling from San Francisco’s Marina to work in downtown San Jose — a drive that would normally occupy the better part of two hours in only 15 minutes,” the company claims.

It promises that future commuters will use a “network of small, electric [VTOL aircraft] that will enable rapid, reliable transportation between suburbs and cities and, ultimately, within cities.”

Prepare to learn the words “vertistop” and “vertiport.” Those are the names for VTOL pads with single and multiple landing areas respectively. These pads can go anywhere: on existing roofs, parking garages, and even at the disused land at the side of highways. Uber has simulated the impact of vertistops on Los Angeles, and found that the first 25 vertiport locations chosen, covered 60 percent of long distance trips taken in the city. That means Uber could move multiple long distance journeys onto its VTOL service, with minimal building work.

Urban routes currently lacking infrastructure will be among the first to take advantage of the VTOLs. That’s because the service will help people get to their destination from far distances, like in the suburbs. At the end of the journey, customers could switch to a traditional Uber to finish the last part.

The tricky part will be getting the takeoff and landing down to an acceptable length (Uber is hoping for one minute at each end) while also allowing for cruise speeds of nearly 200 miles per hour. Part of the plan to reduce timing will involve swappable batteries, with each vertiport offering up several high-voltage chargers. The company notes that others have had problems with fast charging batteries, but that “infrastructure will likely have chargers for every VTOL to enable overnight recharging.”

Surprisingly, Uber also believes the service will be affordable. Small aircrafts, the paper explains, are of similar size and weight to a car, but due to the economies of scale, cost around 20 times more. A mass fleet of aircrafts could reduce total costs, with the initial high prices eventually dropping as more people use the service. This effect was seen with UberX and UberPOOL, which initially started off at a much higher price. Batteries will also be expensive: “An additional factor is that batteries are a major expense, and requiring multiple battery sets per vehicle would be a significant additional fleet expense.”

The price may even seriously rival that of car travel. While a two hour UberX from the marina in San Francisco to downtown San Jose costs $111, the company estimates initial VTOL pricing at $129, dropping in the long term to just $20.

Uber is keen to stress that VTOLs are not the same as helicopters. Noise would be minimal, and the craft would not depend on any one part to keep itself in the sky. Because it will use multiple rotors, these advanced vehicles should be whisper quiet: the company compared the take-off volume to “existing background noise.”

The VTOL design will also help enable the aircraft to takeoff and land in congested urban areas. For most aircrafts, wind directions are hard to accommodate for in confined areas. VTOLs can point their propellers in the right direction to counteract the wind. Other aircraft may need greater room, making a network of “vertistops” harder to develop.

Recently, Airbus announced plans for its A3 Vahana, which was mentioned in the white paper released by Uber, along with a concept from Joby Aviation, its S2:

While pilot training is a time-intensive process today (requiring at least 500 hours experience under visual flight rules), Uber is hoping that VTOLs with limited levels of autonomy would help reduce training time. The pilot would only have to worry about choosing a trajectory, rather than working out how to achieve a desired trajectory using complex control methods. Uber hopes that early autonomy demonstrations could help reduce training times.

Thankfully, the envisioned safety features would help alleviate concerns about unproven technology. Uber believes that VTOLs will eventually become twice as safe as regular driving, although, it admitted that today, FAR Part 135 commuter and on-demand flights have twice the fatality rate of private cars. Part of this reduction will be due to the autonomy features.

All of this amounts to a very different Uber experience than riders are used to today. The app will build VTOL in, as part of a longer journey, displaying walking and driving distances at either end of the flight. And unlike today’s ridesharing, the aircraft will be managed by Uber, meaning the company will have greater control over the in-vehicle experience.

Uber products head Jeff Holden stated last month that he saw the company launching a flying car service in the next decade. If that’s the case, we may start flying to parties sooner rather than later. 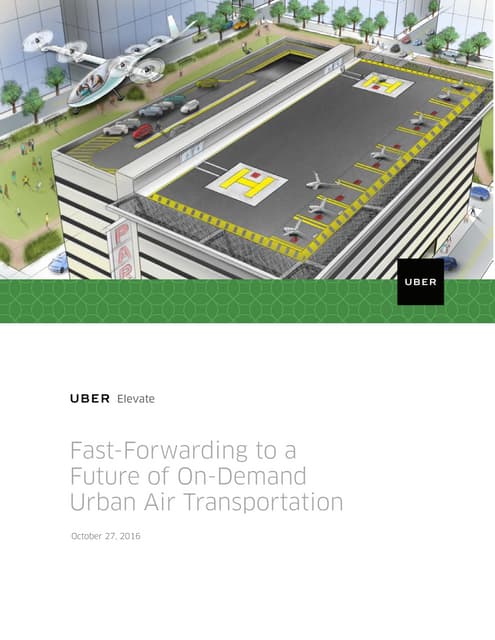