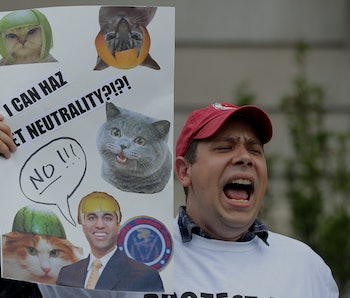 On Tuesday, Amazon, Reddit, and several other major internet-based companies signed on to a worldwide day of action in support of net neutrality.

The protest, organized by the open internet advocacy group Fight for the Future, will involve major websites like Amazon, Reddit, Kickstarter, and Etsy displaying pro-net neutrality messages on their home pages on July 12, combined with appeals to their users to get involved with the cause of defending net neutrality — the concept that all online data should be treated equally. Fight for the Future expects many other major Silicon Valley names to join the petition, but wants to make one thing clear: major corporations won’t save the internet, the public will.

“It’s not giant companies that are going to save net neutrality, it’s grassroots mobilization,” Evan Greer, campaign director at Fight for the Future tells Inverse. “This day of action will be an opportunity for Internet users, startups, gaming communities, political forums, and online communities of all sorts to come together to defend the Internet we all depend on.”

“This is the most support I’ve ever seen for one of these days of action coming out of the gate,” she says. “I’d expect many more household name companies to join in the coming days and weeks.”

Unfortunately, it’s still almost certain that Ajit Pai and the Republican-majority FCC will succeed in overturning net neutrality, at least for the time being. The case will almost immediately go to court, but at the grassroots level, Greer and other advocates say public support is key. The most helpful thing big companies can do, Greer says, is make sure that they’re encouraging their users to get involved (by publicly commenting on the FCC ruling or even shooting Ajit Pai an email).

The subtext, of course, is that major companies like Amazon, Reddit, and Kickstarter don’t support net neutrality because it protects their users’ freedom, they oppose it because removing it could hurt their ability to make money. Silicon Valley’s techno-libertarian culture thrives on the same system of capitalism that Comcast does, so it’s good to remember that these companies aren’t necessarily signing this petition out of warm and fuzzy feelings toward the users whose data they’re frantically hawking in the Big Data marketplace. While Netflix may not think its profits will be disrupted if Pai and the telecom lobby get their way, for thousands of other web services, removing net neutrality could destroy the economic system the internet runs on.

“I think it’s also important that big companies take moment to appreciate that many of them would not exist without the underlying principle of net neutrality that has made the web what it is today,” Greer says. “It’s important that entrepreneurs, CEOs, startups and tech giants all tell their stories about how important this principle is, and how much innovation and creativity it has allowed, especially as the FCC and telecom lobbyists continue trying to make this tech issue into a partisan circus.”

Giants like Amazon and Reddit know it, and so do many others, whose names you can expect to see appearing on the list over the next few days.

More like this
Culture
7.6.2022 1:15 AM
Check out the biggest early Prime Day deals over 50% off & selling out fast
By BDG Commerce
Culture
7.1.2022 11:15 PM
Amazon dropped early Prime Day deals that are legitimately amazing: see the best ones here
By BDG Commerce
Science
6.30.2022 10:15 AM
This "city killer" asteroid won't hit Earth after all
By Andrew Moseman
Related Tags
Share: