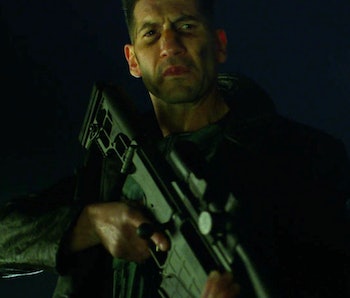 An ominous new teaser of a poster has unofficially been released for Netflix’s upcoming Punisher series, and it’s exactly what you might expect from the next MCU series to drop after The Defenders.

Released via a tweet by an actor from the series, Jason R. Moore, the simple poster prominently features the Punisher’s classic tattered skull insignia against a black background. All it has are the official logos for Netflix and Marvel, along with the release year, 2017. Though no specific release date has been announced thus far, sometime in 2017 has always been the projected release schedule.

Moore will play Curtis Hoyle in the upcoming series, a character that is “a friend of Frank Castle’s and one of the few people who knows he is alive.”

If the poster is any indication, then the Punisher’s iconic skull attire will be front and center in the new series.

Take a look at the poster here:

The Punisher stars Jon Bernthal as Franke Castle, aka the Punisher, a former soldier turned vigilante after the death of his family.

The character made his debut in Season 2 of Daredevil and will return alongside returning actors from Daredevil like Deborah Ann Woll’s Karen Page and several new characters.

After a massive prison brawl that ended with Kingpin having Frank released out of prison, the character went on to finally don his iconic shirt with the skull on it before gunning down some ninjas in Daredevil’s final battle of Season 2.

The Punisher will be released sometime later in 2017.