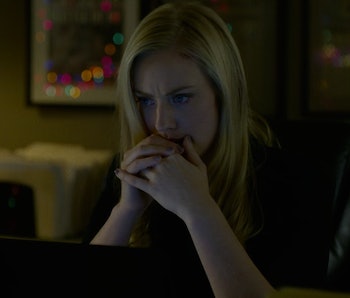 For one reason or another, many superheroes work as journalists during the day. Reporters and photographers, in particular, frequent the pages of comics both as heroes and supporting cast. Clark Kent and his eventual wife, Lois Lane, have always been reporters at the Daily Planet. Even Clark’s Kryptonian cousin, better known as Supergirl, works as a reporter, too — we see as much in the CW’s Supergirl. Over at Marvel, Peter Parker makes pocket money selling photos to the Daily Bugle, and Defenders characters, including dilettante Karen Page and supporting character Ben Urich, work in media as well. The trials of a budding journalist represent a perfect parallel to the fledgling superhero — both industries that favor the bold, authoritative, and creative among us. So let’s pit them against each other, shall we?

Taking a closer look at the various journalists who appear on both small and big screens alongside superheroes shows us a great many writers and photographers of varying quality. Whether super or otherwise, what makes a “good journalist?” You might as well ask, “What is it, to be a hero?”, as Karen Page does on Daredevil.

Ugh. A relatively weak writer and pretty aimless in her professional and personal life, Karen Page of Netflix’s Daredevil is a legitimate killer. She’s often made victim, not only to various assailants, but to some misguided writing in the series. With little to no experience to speak of, Karen has an arc as a burgeoning paralegal in Season 1 before taking a sharp turn into journalism under the tutelage of Ben Urich. Season 2 saw her working with Mitchell Ellison, the editor-in-chief of the New York Bulletin (Urich’s boss). She would eventually and inexplicably become a writer for the paper, despite having no clips. Her first job, writing a feature extolling the heroic virtues in everyday people, was essentially just a puff piece on the Devil of Hell’s Kitchen.

Karen has an inquisitive, non-judgmental disposition that lends itself well to reporting, but the way her character’s story is executed becomes less believable over time, especially when the more interesting Matt and Elektra make such a good-looking ninja-fighting duo in the A-plot of the show. That’s why Karen Page is definitively at the bottom of our list.

Andrew Garfield’s frustrating run as Peter Parker saw the character holding a skateboard more often than a camera, but it’s canonically confirmed in the second movie that Peter had been selling photos of Spider-Man to the Daily Bugle. In doing this, he’s living up to his comic roots, but the furthest Garfield made it was only a few months out of high school, so we don’t get scenes of him working as a photo-journalist like we did with Tobey Maguire’s Peter Parker. The bottom line is that this Peter is only good for taking selfies that’ll get him some quick cash, which is problematic from a media ethics standpoint. You wouldn’t assign a big story to this kid.

After some months of stalking the Flash and fangirling hardcore on her blog, Iris somehow lands a job at Central City Picture News. She wants to become a hard-hitting city reporter, but she initially just gets put on “the Flash beat.”

We know from a newspaper clipping from 2024 that — as the future Iris West-Allen — she’s writing cover page stories in The Central City Citizen. It’s too bad she’s totally just gonna die now. But she’s seen in the thick of things in Episode 5 of Season 3, “Monster,” trying to pry open a stuck bus door to “get a story” while a kaiju is rampaging in the city. Iris has a lot of grit and determination, and she grows quite a bit over the course of the show’s run. Despite still being early in her career right now, she has a bright future ahead of her if she can live to see it fulfilled.

Ben Urich was an investigative journalist at the New York Bulletin, who specialized in exposing the corrupt underbelly of criminal organizations within Hell’s Kitchen. He also had some top cover stories about the Hulk’s battle in Harlem and the Battle of New York, but after his wife became sick, he grew increasingly stressed and jaded … until Karen Page compelled him to resume his work. That choice reignited his passion, but also unfortunately extinguished his life. All in all, he’s a great journalist but loses some street cred for losing his edge in his old age, despite regaining it shortly before his untimely death at the hands of Wilson Fisk.

Kara’s cheery, affable nature — and her unending patience — lent itself well to being Cat Grant’s assistant, but in the Season 2 arc of her trying to be a reporter just like her cousin, Kara encounters some struggles, especially from her new supervisor, Snapper Carr. In one of their earliest encounters, he refuses to recognize her as a reporter, which upsets Kara:

Kara: But this is the job that I chose!

Snapper: Oh you chose it? Well you didn’t earn it. You don’t just become a reporter. This isn’t a Facebook status update. You’re a reporter because you went to journalism school or because you walked the beat. Either way, journos live to tell stories, to get to the truth, to get their hands dirty.

Kara quickly realizes that she can’t rely on Cat to be a helicopter parent that fights her battles for her (an on-the-nose parallel to her working with Superman), and she’s able to turn around a focused assignment that she recites as if written right out of a textbook: “500 words on dual Metallo attacks on Metropolis and National City with eye witness accounts, comments from police sources, and zero adjectives all thoroughly vetted and verified.” After he initially refuses, she threatens the king of all journalistic threats: to bring it to his competitors instead. It works!

Kara constantly struggles to balance her human and Kryptonian responsibilities, but it’s clear that if she has the time, she is more than capable of some textbook-perfect reporting. Much like Iris, she gets credit not just for who she is right now, but for showing that she’s capable of growth as a journalist and proving to us that she’ll one day be something great.

Linda covers the sports beat at Central City Picture News and seems really good at it, too, though we get that sense mostly through implication. Unfortunately, she remains underutilized in the show. Her brief relationship with Barry, and later, short arc grappling with her super-powered doppelgänger make up much of her screen-time — but in the few scenes we do see of her in a professional capacity, she is whip-smart, confident, and highly knowledgeable.

At one point, she refuses to interview a football player who abused his wife and used steroids, so bonus points for integrity in a branch of journalism that doesn’t get as much respect as it deserves. There is a lot to admire in Linda.

James Olsen (No, definitely not Jimmy here. He hates Jimmy.) is the current CEO of CatCo Worldwide Media, filling in for Cat Grant while she’s on an extended leave of absence, and he’s doing a bang-up job of it. James got his start as a photojournalist in Metropolis, but at least some of his accolades come from being friends with Superman. He did take the first-ever photo of Superman that led to him receiving a Pulitzer, but it’s all but certain that Superman was posing, which raises some dubious ethical concerns (not unlike that common for the Peter Parker photojournalist-type).

That being said, in “Human for a Day,” James is able to capture a pivotal moment in which a de-powered Supergirl convinces a gunman robbing a convenience store to hand over his gun. He has a genuinely good sense of what makes for a good moment on-camera and also the business acumen to run an entire media corporation.

It seems a bit strange to think you can’t be both a Lady and a Journalist … but anyway … Man of Steel showed us a Lois who was bold in her pursuit of a story, going so far as to stalk an alien, following him into a bizarre ice palace where she was almost killed by a robot. Her inquisitive mind is a potent one in the Snyderverse, one that was largely left on the cutting room floor when it came to Batman v Superman.

She embodies the classic “watchdog of those in power” role of journalists in asking the tough questions and having the gall to confront people, and to go to places that many other journalists wouldn’t dare. She’s also one heck of a wordsmith and a legit Pulitzer Prize-winning journalist … as she’s quick to remind her Editor Perry White whenever he gives her crap.

Bridge gets a high ranking here for being a confirmed Pulitzer-winning journalist who worked for the Central City Picture News with Linda and Iris. He was originally Iris’s mentor soon after she started out at the newspaper, and filled the stereotyped role of the grouchy, aging journalist. He had the good sense to be suspicious of Harrison Wells (the one that wound up being the Reverse-Flash in disguise), which unfortunately led to his untimely demise. Though a bit stereotypical in his demeanor, Mason was one hell of a journalist. RIP.

Ever the veteran on both the superhero and the journalist front, Kal-El as he appears on Supergirl is a nearly flawless, bland Mr. MacGuffin in the first few episodes of Season 2. As such, he is particularly effective at journalism duties when it comes to investigating Lena Luthor’s involvement in a space shuttle’s crash. Kara learns a lot from him and he serves as a big source of inspiration for her wanting to pursue being a journalist, too. She calls him a “big-big nerd” and admires his expert detective skills, both things that make him good at being both hero and journo.

That’s right. The indisputable queen of media, Cat Grant, is at the top of our list. She was a beacon of awesomeness throughout Supergirl Season 1 and her progressive departure in Season 2 has been bittersweet. She started a media empire from the ground up, starting out as an assistant to Perry White at the Daily Planet until her first big break writing for the gossip column. Years later, she was running a global empire. Not really knowing how she made it that far is part of what makes her such an endearing presence.

She effectively made Supergirl through the branding power of her empire. Supergirl as a show is pro-women in its portrayal of feminine strength, not just in Kara’s growth over time as a hero, but also in Cat’s resilience in the face of adversity, and in her wisdom as a role model and source of inspiration for Kara. Cat consistently stood up to threats, was smart enough to figure out Kara was Supergirl very quickly, and always had a good sense of the best journalistic decisions, both from a newsworthy and ethical standpoint. What’s more journalistic than all that?