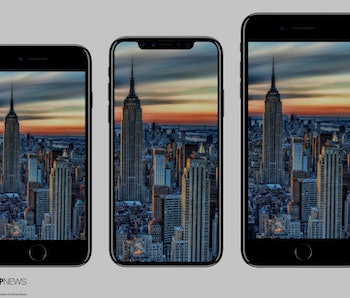 Apple’s iPhone 8 is set to revolutionize the company’s smartphone line, 10 years after its introduction. A new rendering shows how current rumors of a device with a larger screen, advanced facial recognition features and a hidden fingerprint scanner are building up to an incredible device that looks set to revitalize Apple’s most important product line.

On Tuesday, prolific Apple leaker Benjamin Geskin shared some new renderings with iDropNews of how the iPhone 8 will look when compared to the iPhone 7 and 7 Plus. The result is a device that makes Apple’s current lineup look decidedly ancient, one that ditches the ugly bezels of its predecessors in favor of a sleek, modern design reminiscent of the Samsung Galaxy S8.

The leak matches with previous reports that showed the device will have an edge-to-edge display, as well as a reshaped body that places the dual cameras in a vertical arrangement.

In terms of screen size, the iPhone 8 is expected to come with a 5.8-inch display, where the 7 has a 4.7-inch screen and the 7 Plus has a 5.5-inch display. The larger size is made possible thanks to the new bezel-free design, as well as a new screen shape that provides a cutout for the speaker and 3D front-facing cameras.

Apple is expected to move to OLED display technology with the iPhone 8, with the company currently uses in its Apple Watch. Unlike LCD, the new technology will enable the screen to shut off sections entirely, producing blacks far deeper than traditional screens that feature an always-on uniform backlight across the display.

The company is expected to unveil the iPhone 8 at an event in September. A restriction is already in place for Apple staff wishing to take time off around the end of that month, suggesting the company is putting out all the stops to ensure all hands are on deck for the big launch.