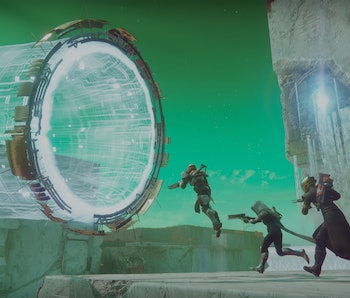 There’s no questioning just how big of a video game release Destiny 2 is going to be come September, with Bungie gearing up to launch the series’s next chapter on PC, Xbox One, and PlayStation 4. A gameplay reveal in Los Angeles in early May showcased dozens of secrets from the sci-fi shooter’s sequel — including the introduction of a new enemy keen on claiming the Traveler’s Light, an overhauled set of subclasses, and brand new locations players will be exploring while regaining their powers from the first game.

While players certainly still have a handful of concerns about how Bungie is addressing content drought, Destiny 2’s planned DLC expansions, and the end-game activities of the next adventure, there are also plenty of fantastic changes that have already been made to improve the player’s experience.

Here’s a look at the five biggest changes coming to Destiny 2, and how they’ll impact your experience in-game.

If there’s one negative aspect of Destiny every player in the community could agree on, it’s the complete lack of narrative and storytelling throughout the game’s entire lifespan. Instead of telling the players about the universe of Destiny firsthand, Bungie required them to read Grimoire Cards online or come to their own conclusions using the tidbits of information provided through in-game dialogue.

In Destiny 2, you’ll be happy to know that Grimoire Cards have been completely removed from the game in favor of more cinematics, voiced dialogue, and in-game discoveries players will come across while playing the game. Now, you can experience the story of Destiny’s universe yourself, through exploration and character interaction, which will be happening much more often in Destiny 2.

Subclasses Have Been Reworked

While some of the subclasses from Destiny — like the Titan Striker and Hunter Gunslinger — will be making a return in Destiny 2, each of them has been reworked to provide a new sense of power you can use. There are new Super abilities, like that of the Warlock Dawnblade, as well as additions to your returning favorites, like the Gunslinger’s new six-shot Golden Gun.

Destiny 2 is also bringing three new subclasses to the mix: the Warlock Dawnblade, the Titan Sentinel, and the Hunter Arcstrider. Each of these come with a new Super ability and other abilities to unlock. While we don’t know too much about every new subclass at this time, more details are sure to surface as we get closer to the game’s September 8 release.

One of the most significant changes being made to Destiny 2’s various subclasses is the addition of a new ability, giving players a total of four major abilities (including their Super) for every subclass in the game. Subclass abilities offer a benefit, depending on what your Guardian specializes in, to grant you an active boon on the battlefield, such as health regeneration for your fireteam or an instant reload on your currently equipped weapon.

At this point, Bungie has revealed three subclass abilities you’ll be able to use in Destiny 2. The Warlock Dawnblade has the Rift ability, which allows you to deploy a font of Light that either heals your teammates or provides them with a substantial damage boost. Titan’s Striker has Barricade, which allows you to deploy a shield of Light your teammates can use for cover. Then you have the Hunter’s Gunslinger Dodge ability, which automatically reloads your weapon and displaces you in the direction you were moving towards.

To bring a tighter sense of competitive balance to Destiny 2’s PvP, Bungie has reduced the player count from 6 vs. 6 to 4 vs. 4 within every single one of Destiny 2’s Crucible modes, focusing on a smaller team format that relies on a player’s skill and coordination compared to the continued use of Super abilities to obliterate entire groups of Guardians throughout a match.

Bungie has also tweaked several elements of the Crucible experience we’ve come to know over the last few years, too, adding a display which shows when each player has their Super ability ready for use, and only allowing a single player to pick up one power weapon ammunition at a time. The hope is to provide a more competitive environment akin to Halo 2 and Halo 3 while retaining the epic combat Destiny is clearly known for.

With Destiny 2, Bungie has worked to directly address problems players were having when accessing some of Destiny’s best content, such as Raids and Nightfall strikes. Since these activities required a coordinated group of six players, many were left in the dust, due to a lack of gear or experience, and with no dedicated matchmaking system, they never had the chance to complete some of the most memorable content in the game.

Destiny 2 aims to fix that by introducing a new system called Guided Games, which combines matchmaking from your standard multiplayer experience with looking for group features of your standard massive multiplayer online games. Here, Clans will be able to look for solo players to fill slots in their Raid groups by advertising them, and solo players will get the chance to experience everything Destiny 2’s end-game content has to offer.