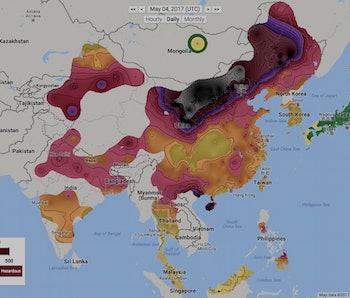 Air pollution in China appears to have improved over the past year, though it’s still really, really bad. Last month Beijing saw smog so thick that just breathing for a day was as unhealthy as smoking 40 cigarettes.

That’s according to data from by Berkeley Earth, which tracks air quality in China and elsewhere in real time. Their analysis compares exposure to fine particulate matter pollution to smoking in terms of health consequences.

The organization, which has collected air quality data in China for about two years, has seen about a 10 percent improvement year over year. That’s statistically significant, but it’s hard to say if it indicates a larger trend, Berkeley Earth co-founder Elizabeth Muller tells Inverse.

“It’s hard to know what was causing it,” she says. “It’s very possible that it is government action, and the government does claim to be taking significant action in reducing air pollution.”

The event last month was caused in part by a large sandstorm that blew fine particulate matter — PM2.5 — over from Mongolian deserts. But the heart of China’s air pollution problem isn’t Mongolia or even Beijing, it’s the industrial areas outside of cities that burn coal around the clock in order to power factories. Winds carry particulate matter across the country, impacting rural and urban areas alike.

“Much of this floats over the entire country,” says Muller. “The pollution in China is not limited to the cities. It’s just as bad when you leave the city as it is in the city itself. That was really surprising, not only to us, but also to people who are in China, who had really thought that it was coming from the cities.”

Even an average day in Beijing is equivalent to four cigarettes. That means that over the course of a year Beijinger do as much damage to their health as they would smoking 1,460 cigarettes, just by breathing. “It’s not just the adults who are smoking this, but the kids and the babies, too,” Muller says.

Dust storms from Mongolia to the north and from Central Asia to the west are unavoidable, but the government actually wields a surprising amount of control over air pollution levels on a daily basis. See for example September 2015, when the government ordered more than 10,000 factories and construction sites to slow or halt operations in time for a military parade featuring VIP international guests.

“When they shut down the industry, they get these beautifully pristine, clear, gorgeous air days,” says Muller. “And they’re known for it. The Chinese call it ‘parade air.’”

Many of China’s coal power plants are outfitted with scrubbers, which clean up the exhaust before it is emitted, says Muller, although it seems they are used inconsistently. Running scrubbers is expensive, and when it’s not a parade day the government’s cost-benefit analysis shifts on enforcing their use.

Whether or not the air quality gains continue into the future is largely up to how committed the government is to backing up their talk with real action. Recent reports that the government is cutting back on coal are misleading — the government isn’t decreasing use of coal, only scaling back the expansion of coal from what had been previously planned. “They’re still adding approximately a new coal plant every week, and so I have a hard time being optimistic about that,” says Muller. “Maybe in another year’s time if there is another decrease, then I would feel more positive about it.”