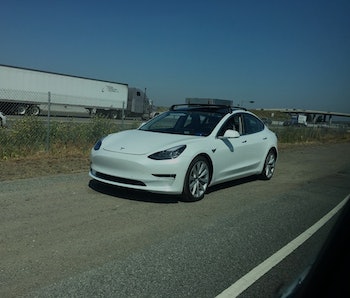 The Tesla Model 3, the company’s upcoming entry-level vehicle, is not expected to offer much in the way of premium extras. A leak earlier this week revealed that the $35,000 car will come in fewer than 100 different configurations, where the current Model S is available with more than 1,000. So it’s perhaps a bit surprising to see that the company is testing some premium features in a new sighting ahead of the planned production start date in July.

A Reddit user called slipsloppoopy shared an image Wednesday of a Model 3 with a roof rack and package attached. Tesla has yet to reveal the full range of options for the Model 3, so these leaks are the best way of understanding which features it’s bringing over from the Model S, and which ones may be cut to ensure the company can maintain the current vehicle as a premium offering worth paying $68,000 for.

Tesla currently offers a Whispbar system roof rack on its website for the Model S at a price of $549. The aftermarket accessory is designed to reduce drag by up to 70 percent compared to other bars - a critical metric for maintaining the range per charge rated with the standard vehicle.

The Model S roof rack is only compatible with the panoramic sunroof, and will not work with the solid metal or glass roof configuration. If this limitation carries over to the Model 3, it suggests the company is testing a version with a sunroof option. This is a premium feature that costs an extra $2,000 on the Model S, and if the Model 3 includes it as an option to support the roof rack, it checks off one extra possibility for premium features.

In the picture, the car is also seen carrying a box on the roof rack. In keeping with Tesla’s aim to reduce drag, this is likely to gain a better understanding of how the range is affected by external factors. Tesla promises a range of 215 miles on the base version of the Model 3, and Elon Musk has already said that the vehicle will start with a battery smaller than 60 kilowatt-hours, which was the smallest battery available for the Model S until Tesla discontinued the configuration.

A smaller battery saves money, but also means Tesla needs to find savings from elsewhere to maintain acceptable range. The body is comprised of a part-aluminum metal to reduce weight, and the company has aimed for an incredibly low drag co-efficient of 0.21, which enables to car to move through the air with less force to achieve the same speeds. A package on a roof rack could disrupt this work.

The car is set to enter Tesla into a wider marketplace, with a new price point making its vehicles more affordable than ever. As many people’s first experience of a Tesla, the pressure is on for the company to make a good first impression in the wider marketplace.