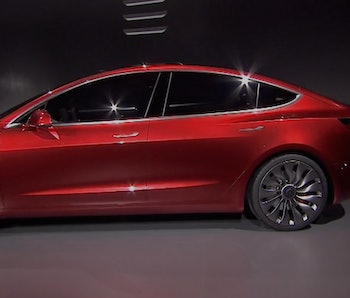 When it launches, the Model 3 will be the Tesla’s cheapest vehicle by some distance. It hasn’t been a smooth journey: Since Tesla launched the premium-range Roadster back in 2008, Elon Musk’s car company has long catered to customers who want luxury.

How Many Tesla Model 3 Preorders?

While Tesla hasn’t revealed how many $1,000 preorders it’s received for the Model 3, the most recent estimate in April 2016 puts the number around 400,000 Model 3 reservations. Assembling that many cars and delivering them on time represents the biggest challenge the company’s ever faced, and the company is making a significant number of moves to pull it off.

How Much Money Will Tesla Make on the Model 3?

Musk has said the Model 3 will generate $20 billion revenue with $5 billion gross profit. That means a margin of around 25 percent on every Model 3 sold. For the base-model, $35,000 car, that’s $26,250 going into production, with $8,750 off the top. With the Model S starting from $68,000, and the company posting gross margins around that percentage rate already, Tesla has set itself a big goal of making reductions.

Why the Tesla Model 3 is Relatively Cheap: Less Stuff

The company has made a number of cost-cutting measures to the Model 3. The car has half the wiring of a Model S, and only contains one computer and screen where the Model S has two. The Model 3 will also have fewer seats (lacking the seven-seat option of the Model S), less cargo space, and features like automatically extending door handles will be missing, Musk noted on Twitter. Performance-wise, it will have a lower range, slower acceleration, and less power.

The Model 3 isn’t the Model S. “Am noticing that many people think Model 3 is the “next version” of a Tesla, like iPhone 2 vs 3,” Musk clarified recently. “This is not true.”

But the battery is where Tesla will see major savings, and they have plummeted in price. A January report by McKinsey & Company found that battery prices have dropped nearly 80 percent over the past seven years: in 2010, batteries cost around $1,000 per kilowatt-hour (kWh), but by the end of 2016, they reached around $227. By the end of the decade, prices are expected to dip below $190. (Now only if they could make them lighter.)

Tesla claims it has already reached below that. In an April 2016 investor call, vice president of investor relations Jeff Evanson said the company had already hit prices below $190 per kWh.

The base-level Model S currently ships with a 70 kWh battery. Assuming Evanson’s figures are correct, that places battery costs around $13,300. That’s a large chunk of the Model 3’s $26,250 production costs from above, so Tesla is doing two things to push battery costs down further.

The first is the Gigafactory. When complete, the five million square-foot factory will produce batteries at a faster rate than bullets coming out of a machine gun. Through this, Elon Musk is aiming for sub-$100 per kWh prices by 2020.

The Tesla Model 3 is Small

At the other end, the Model 3 has a frame that’s around 20 percent smaller than the Model S. Tesla is using a partial aluminum frame, as opposed to the more expensive all-aluminum frame on the Model S, to maintain some of the weight savings while also reducing material costs.

The weight savings means the company can pack in less battery to achieve the same range. The company confirmed in the April call that the Model 3, which will have a minimum range of 215 miles, will have a battery pack smaller than 60 kWh as its starting model. This, combined with a plunging kWh cost, means big savings on an expensive component. By 2020, Tesla could be shipping a 50kWh Model 3 with a battery costing as little as $5,000, less than a fifth of total production costs.

Musk has been upfront about the fact that the company will “anti-sell” the Model 3 to push buyers onto the more expensive models. Plus, the company is likely to offer optional extras to drive up prices. We don’t know what the cost breakdowns will be of these extras, but analyst Ben Sullins has said, he believes the Model 3 will have an average price of around $50,000 as buyers add on extras. It may turn out that the $35,000 tag is just a way of enticing customers in, but Tesla will have worked hard to reach that point.