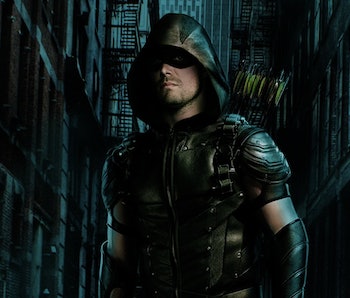 Netflix is about to get another arrow in its quiver of superhero programming, as the fifth season of The CW’s series following Oliver Queen’s bow-wielding Green Arrow is heading to the streaming service soon.

Arrow, the show that kicked off The CW’s Arrowverse, experienced a bit of a critical dip in recent years, as well. For many, the main critique was that the show had lost its way by delving too deep into DC’s magical worlds. But, in Season 5, Arrow returned to what it did best: deliver street-level action at a faultless pace.

So there’s no better time to catch the latest season of Arrow* on Netflix, and thankfully it will be there very soon.

Thanks to a deal The CW and Netflix struck during the summer of 2016, all of the network’s shows will grace the streaming service eight days after the season wraps up.

This means that Season 5 of Arrow should make itself available on Netflix on Thursday, June 1, a little more than a week after the season finale airs on May 24.

The same happened when Legends of Tomorrow Season 2, The Flash Season 3, and Supergirl Season 2 all wrapped up as well.

In the meantime, you can watch the Season 5 finale of Arrow on Thursday, May 24, on The CW at 8 p.m. Eastern.