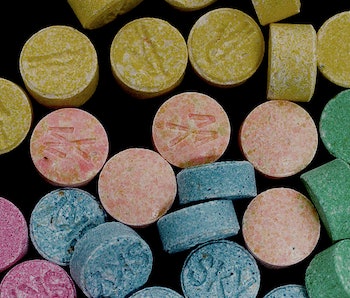 The synthetic drug 3,4-methylenedioxymethamphetamine chemically mimics both stimulants and hallucinogens, causing users to feel increased energy, pleasure, and emotional warmth. These effects are what makes the substance, more commonly known as MDMA, such a popular party drug — and a point of fascination for scientists looking for new ways to treat anxiety.

According to the annual Global Drug Survey, however, while the substance in some dosages can be relatively safe, people who use MDMA recreationally continue to show risky patterns of drug use.

The Global Drug Survey 2017, released Wednesday, is the largest survey on recreational drugs. This year, it surveyed 119,846 mostly young, semi-frequent drug users from over 50 countries. Within this group, 26,555 people reported using MDMA within the past year.

Survey results revealed that only one in ten recent MDMA users directly or indirectly (some claimed a friend checked for them) used a drug-checking service to determine the purity and actual content of the pills and powder they were consuming. That’s important because it’s not uncommon for substances like Ecstasy and Molly to be sold as drugs containing MDMA, but actually include little to none of the actual drug.

The survey authors, led by Dr. Adam Winstock of King’s College London, also point out that when pills like Ecstasy do contain MDMA, the amount is dangerously on the rise. Winstock and his team found that some pills can have up to 300 milligrams MDMA per pill, 100 milligrams more than was seen as the highest amount in 2016. The amount of MDMA that researchers believe is “relatively safe,” however, is between 75 to 125 milligrams.

While the number of MDMA users who needed to use emergency medical services after taking the drug this year is relatively low — 250 participants needed help out of the thousands surveyed — the global trend of people seeking medical help post-MDMA is rising. The percentage of people needing medical services for this drug rose by 0.4 percent between 2016 and 2017.

Why people may need medical services often comes down to a lack of knowledge about what the drug actually includes, consuming too much so that feelings of nausea and panic emerge, and pairing the drug with alcohol or other drugs.

“On most occasions, drug-related harms can be more closely linked to individual behavior than the drug itself,” the survey authors writes. “Better quality drugs are only safer if people use them more sensibly.”