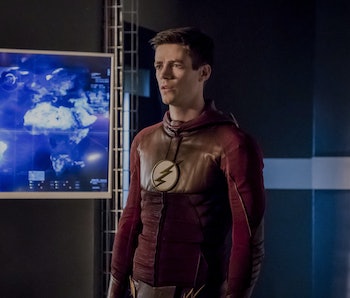 Let this be a lesson to everyone watching The Flash: If you ever mess with the timeline, you will pay the price. And no, it’s not pretty.

Spoilers for The Flash Season 3 finale are below.

In “Finish Line,” which has Barry Allen (Grant Gustin) prevail over Savitar, the Fastest Man Alive submits himself a prisoner to the Speed Force — personified by his mother Nora Allen once again — in order to prevent it from collapsing all over Central City. A year after selfishly creating the alternate Flashpoint timeline, Barry, who literally just finished sending wedding invitations, once again loses his peaceful life with Iris West (Candice Patton) and the rest of his friends and family at S.T.A.R. Labs.

The Flash’s third season closes out with a truly tearful moment as Barry says goodbye to loved ones like Papa Joe West (Jesse L. Martin) and allies like his father’s Earth-3 double Jay Garrick (John Wesley Shipp). He asks Harrison Wells, visiting from Earth-2, to stick around. But most importantly, Barry encourages Wally West (Keiynan Lonsdale) to take his place as the Flash. Although it’s not a 1:1 adaptation of Marv Wolfman’s Crisis on Infinite Earths from 1985, the final moments of the season finale sure feels like it. The game-changing event series Crisis on Infinite Earths upheaved the DC universe in a lot of ways, but perhaps the biggest repercussion was Barry Allen’s death, which allowed Wally West to become the Flash throughout the ‘90s and most of the 2000s. It seems, perhaps, “Finish Line” is doing the same for the Arrowverse.

But, while Barry may be gone, Grant Gustin probably isn’t going anywhere. The most recent press release for The Flash that The CW unveiled for the 2016-17 fall season still lists Grant Gustin as having a starring role. It’s likely Barry’s entrapment in the Speed Force will be temporary — compare it to Flashpoint essentially lasting just one episode in the beginning of this season. Until anyone says otherwise, The Flash fans can slow down about their hero.

Of course, The CW could be lying, but something tells us that Barry Allen will find his way back in the wake of this latest crisis. After all, he did it in the comics.

When Will ‘The Flash’ Season 3 Be on Netflix?

The 5 Biggest Questions for ‘The Flash’ Season 4