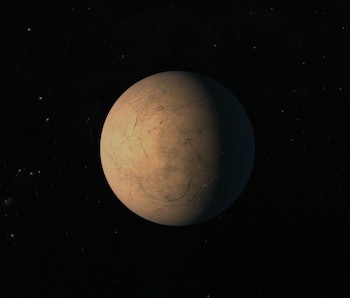 If there’s life on one of the seven potentially habitable planets residing in the TRAPPIST-1 system, we should refocus our efforts of finding it to probably just the first six. Scientists using NASA’s Kepler Space Telescope have finally characterized the orbital patterns of the outermost planet, affectionately named TRAPPIST-1h, and the odds that it could host alien life have suddenly taken a hit.

TRAPPIST-1, located about 40 light-years away in the constellation Aquarius, has quickly become one of the most exciting exoplanet discoveries in recent memory. The identification of a habitable exoplanet is aways thrilling, but a system with seven such planets, just a stone’s throw away (in cosmic terms), is unheard of.

But scientists are used to having their hopes tempered as they learn more. In the new study, published in Nature Astronomy, the research team found that TRAPPIST-1h has an orbital period around its host star, a small white dwarf, of 19 days. This puts it sitting right outside the outer edge of the habitable zone — the term scientists use to describe the region around a star where surface temperatures a likely to facilitate the existence of liquid water. It doesn’t take a genius to know that water is key to life, at least as far we know so far.

The amount of energy TRAPPIST-1h gets from the star is roughly the same as what an object like Ceres, the dwarf planet located in the asteroid belt, gets from the sun.

Though the findings aren’t the happy news we all wanted, they were in line with what scientists had already suspected. Moreover, they don’t outright extinguish the hopes that TRAPPIST-1h could still host life. “Depending on its radiogenic heat flux and on its initial water content, it is not implausible that TRAPPIST-1h could have a subsurface ocean under a thick layer of ice,” Rodrigo Luger, a University of Washington astronomer and lead author of the new study, tells Inverse. “The planet was likely warmer following its formation, which could have allowed for life to get started and continue today in a putative sub-surface ocean.”

Of course, Luger emphasizes, this is all speculation, and much closer observational data will be required to confirm any of these possibilities.

The scientist were able to pinpoint TRAPPIST-1h’s orbital pattern by getting a better understanding of the gravitational tug-of-war the other six planets were exerting on one-another. Called orbital resonance, this force is predictable after you’ve accrued enough data.

The orbital resonances of the other six planets, determined through data collected by the Spitzer Space Telescope, is what allowed the team to deduce what the velocity and movement patterns were for the seventh object, even before Kepler’s survey of more transits over the course of 80 days. The new data only bolstered the case for what the team already suspected.

TRAPPIST-1h might be a cold duckling sitting too far from its mama star, but life can sometimes find a way, even in the most extreme environments. Never say never. In the meantime, Luger and his team are looking to determine more accurate masses of the system’s planets using more transit data, while other members of the team are also working on further characterizing the star by modeling flares observed by Kepler. There is no telling what kind of surprises TRAPPIST-1 still has up its white sleeves.