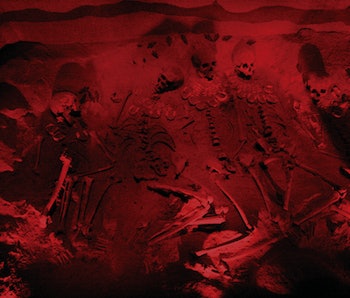 Death used to be a pretty eco-friendly process. Not so much today.

Every corpse releases carbon dioxide, methane, and about 398 other things in the decomposition process. While these natural compounds can be returned to nature — skin feeds worm; carbon feeds trees; and the calcium stored in one skeleton can be used to build a new one — we don’t tend to wrap Grandma and Grandpa in a biodegradable sheet and let nature have at them.

In the U.S., we usually box them in thick, chemically treated boxes or turn them — rapidly — to dust. Coffin manufacturing requires the equivalent of 1,800 single family homes worth of wood each year. Preserving a body with formaldehyde exposes undertakers and the earth around a corpse to a dangerous chemical. And cremation takes about 285-kilowatt hours of gas and 15-kilowatt hours of electricity per body.

Those concerned about the environmental impact of modern death intends to change this by making death a little more green, bioethicist Phil Olson tells Inverse. But they’re not the only ones with ideas about the future of burials — many think space is death’s final frontier. Whatever you end up picking, it’s safe to say in the future, we’ll all be, er, handled a little differently than the dead are today.

One of the most radical people thinking about the future of death is Katrina Spade, founder of the Urban Death Project. Based in Seattle, Washington, the project is currently in the early stages of developing a process they hope will turn bodies into soil that can grow new life, like trees and gardens.

The basic idea is modeled on livestock mortality composting, which sees widespread use on farms across the country. Farmers and ranchers place the body of a horse, cow, or other animal into the center of a compost pile that, through microbial activity, reaches 140 degrees Fahrenheit in the center. The heat is thought to kill off dangerous bacteria and, most importantly, helps the carcass slowly decompose.

The technique is far from widespread for humans though. A lucky few bodies will be included in the Urban Death Project’s pilot test, which begins in June. It sounds like it will take a while to finalize the tools, timeframe, and other procedures necessary for large-scale human composting. But decades from now, this may be our go-to burial method.

Followers of the Zoroastrian religion living in India have been taking an au naturel approach to death for millennia. When a Parsi, as members of this group are called, dies, their body is laid out in a Tower of Silence. The tower is a big circle with different rings for men, women, and children. The carcasses placed there are picked apart by vultures, while the bones are slowly bleached by wind, rain, and sun, and the remains washed out to sea. Many Tibetans undergo roughly the same process, too.

But South Asia’s vulture population has rapidly declined in recent years — with as many as 99.9 percent of some populations dying — in part because of this act of charity. When the vultures ate away at humans and livestock laced with pharmaceuticals, the bird’s kidneys failed, killing them.

Some people in the U.S. are choosing a kind of artificially-accelerated sky burial — and one that experts say doesn’t result in any contamination, birds or otherwise.

Legal only in a handful of states, alkaline hydrolysis originated in the lab, when researchers were struggling to rid themselves of rat and other lab animal carcasses. It involves submerging a body in a special tube with water and potassium. The temperature is turned up high, but so is the pressure, so instead of boiling, body tissue dissolves. Within two or three hours, Grandma can be totally flushed away, reportedly without a trace of DNA.

The thing is, while alkaline hydrolysis is a low-carbon solution to burial, it requires an obscene amount of water — about 300 gallons per body. This may have mattered less in the past, but thanks to climate change, freshwater is quickly becoming a premium. Olson thinks there might already be a solution — the machine operators could use wastewater, like what’s left after you shower or flush, instead of the tap.

Perhaps most futuristic of these burial options comes from Elon Musk.

Just this week, SpaceX announced it would take your ashes to space for just $2,490, which is actually a lot less than a traditional funeral. Plus, it turns you into your own kind of astronomical feature, as Inverse reported:

“A customer deposits the deceased’s cremated ashes into a customized capsule which is sent over to Elysium Space. The company puts the capsule into a spacecraft that’s launched into space, and the payload is placed in lunar orbit, all the while keeping the ashes safe. For two years, the memorial spacecraft orbits Earth, and eventually enters the atmosphere, burning up as a shooting star.”

There are already 100 people signed up for the next voyage and, it seems, many more to follow.

So what will you pick — an earthy technique or a sci-fi space burial?

Regardless of what happens when the time comes, Olson, the bioethicist, suggested the impulses might be the same. “Maybe those practices are scratching the same itch for people in different ways,” he tells Inverse. If you’re turned into a tree, you may technically be dead, but a part of you, at an atomic level at least, is still living. The same could feel true for those who plan to have their ashes shot into space. They may be dead one day, but when they picture themselves swirling around space for eternity, they may still be filled with a sense of awe and oneness with the universe.

And what more could you ask from death, really?

Biocremation Could Bring Dead People Back to American Cities

Does the Afterlife Exist?