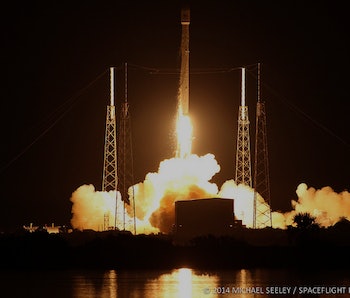 Humans are surprisingly creative when it comes to finding ways to celebrate the dead. And some of those ideas are plain out of this world — literally. Elysium Space wants to use SpaceX rockets to shoot the ashes of dead people into space for $2,490 a person.

Yes, you read that right.

The San Francisco-based company says it specializes in “memorial spaceflight,” naming itself after the afterlife realm depicted in Greek mythology. “We are dedicated to offering awe-inspiring celestial services to the world and celebrate the significance of lives that have been lived with dignity and honor,” the company’s website promises.

“We are honored to assist families in achieving their dreams, riding on one of the greatest rockets in the world,” said Thomas Civeit, founder and CEO of Elysium Space, about the news. “This historical launch provides the perfect conditions to make this memorial spaceflight an exceptionally meaningful experience for all participants.”

If you’re wondering if this’ll actually happen, this part’s important: Elysium Space has already pulled off a previous launch, in late 2015 — but the payload did not reach its planned orbit. The successor mission, Star II, is now fully confirmed, and will go up a SpaceX Falcon 9 flight in the second half of 2017, from Vandenberg Air Force Base in California. The exact date has not been confirmed yet by SpaceX.

The idea is pretty simple: a customer deposits the deceased’s cremated ashes into a customized capsule which is sent over to Elysium Space. The company puts the capsule into a spacecraft that’s launched into space, and the payload is placed in lunar orbit, all the while keeping the ashes safe. For two years, the memorial spacecraft orbits Earth, and eventually enters the atmosphere, burning up as a shooting star.

The company is making an app that allows friends and family to follow the spacecraft’s trajectory via their mobile phone.

About 100 people have already booked their spot on the Star II mission.

Elysium Space isn’t just stopping at tossing your loved ones’ ashes into orbit. The company is already making preparations for Lunar I, a memorial spaceflight to occur at the moon.

“The Lunar Memorial delivers a symbolic portion of remains to the surface of the moon,” Elysium declares. Lunar I is supposed to occur with the help of the Astrobotic mission to the moon, probably sometime in 2019 (though Elysium Space still lists the launch for sometime in 2018).

It’s a hell of a way to say goodbye to the dead, that’s for sure.

More like this
Innovation
Jan. 25, 2023
Starship orbital flight: SpaceX successfully loaded the rocket with over 10 million pounds of propellant
By Mike Brown and Molly Glick
Innovation
Jan. 23, 2023
These 5 futuristic tech ideas could help us explore distant worlds
By Jennifer Walter
Science
Feb. 2, 2023
Scientists Created A New Type of Ice — It Could Also Exist On Distant Moons
By Rahul Rao
LEARN SOMETHING NEW EVERY DAY.
Share: