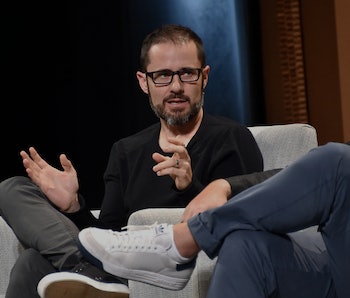 Twitter founder Ev Williams is having second thoughts about the online world he helped create.

“I think the internet is broken,” he says in a New York Times profile published Saturday.

It’s undeniable that we’ve entered something of a dark era in the evolution of the internet, especially in regards to social media. Suicides, rapes and murders are being broadcast live on Facebook, while partisan echo chambers have helped fake news flourish. According to the Times’ article, “Four out of 10 adult internet users said in a Pew survey that they had been harassed online.”

Williams’ idealistic vision for a free and open commons — like Twitter —didn’t turned out the way he planned.

“I thought once everybody could speak freely and exchange information and ideas, the world is automatically going to be a better place. I was wrong about that.”

The problem with the internet in its current incarnation, according to Williams, is that it rewards extreme content and viewpoints. He gives the analogy of feeling compelled to stare at a car crash. The more people look, the more the internet believes that’s the kind of content people in fact want — and then flaming car wrecks become the only content available.

He says he feels especially guilty for his company’s role in giving President Donald Trump his most-preferred platform. “It’s a very bad thing, Twitter’s role in that,” Williams tells the Times. “If it’s true that he wouldn’t be president if it weren’t for Twitter, then yeah, I’m sorry.”

Williams says he’s trying to break the pattern with Medium, an online publishing platform he started in 2012. The website is attempting to be heard above the din of fake news and clickbait by featuring high-minded writing and a loosely-curated approach, including a number of publications within the platform.

But will the internet at large find its way back to an identity as the commons for free information and ideas? “I think we will fix these things.” Williams tells the Times. Still, he believes it’s going to take a while. “Twenty years isn’t very long to change how society works.”

You can read the full New York Times profile on Ev Williams here.