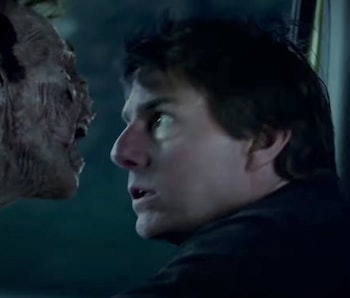 Normally, monster movie franchises kick off as solo outings. Godzilla trashes Tokyo on his own before throwing down with a rival kaiju in the sequel, and Freddy Krueger and Jason Voorhees were lone terrors before Freddy vs. Jason. But, the upcoming remake of The Mummy looks like it’s going to be giving its titular Egyptian monster a worthy opponent right out of the gate.

The third trailer for the movie more fully explains just what the hell is going on with Tom Cruise, that he survived that terrifying plane crash that kicked off the first trailer. It turns out, as Russell Crowe’s Dr. Jekyll, the mummy cursed him. We see a shot of Cruise’s dreamy green eyes going splitsies — just like Sofia Boutella’s four-irised mummy.

We still don’t know exactly why Cruise was cursed, (did the mummy do it intentionally, or did some of the curse just kind of transfer over to him?), but we do know that he’s being set up to have a superpowered brawl with the bandaged baddie.

The trailer, which you can watch below, leans much more heavily on humor than the first two. The Mummy might not end up being all that scary, but it looks like it’ll be a fun romp.

Unwrap The Mummy on June 9.