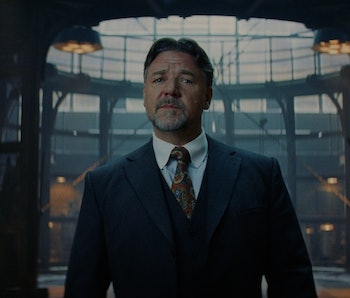 Russell Crowe’s Dr. Jekyll reveals his darker side in a new featurette for The Mummy, and the monstrous transformation mostly just makes his eyes look weird.

Dr. Jekyll runs Prodigium, an organization that “pinpoints evil and tries to neutralize it,” according to the actor. “We recognize, examine, contain, destroy evil,” his character says to Tom Cruise’s Nick Morton, the mummy-affected lead in the movie.

Director Alex Kurtzman explains that the aim is to ground the Monsterverse in the reality of science, and it’s science that Dr. Jekyll and Prodigium bring to the table. It’s not totally dissimilar to how Nick Fury and S.H.I.E.L.D. wove their connective tissue throughout the Marvel Cinematic Universe, using the organization’s resources and influence as a means to draw a number of different characters together. In the case of Dr. Jekyll and Prodigium, they’ll be bringing together monsters like the Wolf Man, Frankenstein, Dracula, and more.

Though it hardly comes as a surprise given his namesake, Jekyll saying, “it takes a monster to defeat a monster” only confirms that he’s got a Mr. Hyde simmering inside somewhere. And sure enough, we get a glimpse.

We only see Mr. Hyde for a brief moment in the sneak peak, and virtually no details are given beyond the glowing yellow eyes.

The Mummy awakens in theaters on June 9.