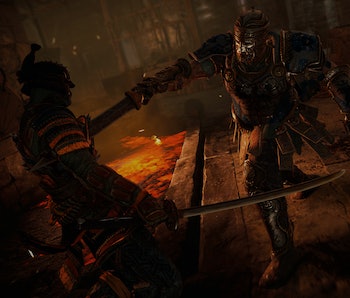 The first DLC for For Honor, a thrilling combat game that plays fast and loose with historical, came out on Tuesday, and Shadow and Might introduced two new playable heroes. One, the Centurion, is a close-quarters powerhouse inspired by none other than the legendary warriors who served as the backbone of the Roman army. In For Honor, the Centurion is an in-your-face powerhouse, capable of locking down opponents and barraging them with attacks which will drain their stamina. Unlike the Lawbringer however, this hero isn’t designed to offensively overwhelm your opponent. Instead, you’ll want to focus on countering each of their attacks while simultaneously retaliating with your own.

The Centurion feeds off enemy mistakes and heavily punishes them with a brutal series of mix-up attacks, locking them down with combos designed to bypass defenses. Armed with a standard-issue gladius, which requires you to get up close and personal to remain effective, this new hero is a beautiful addition to For Honor’s current roster of playable characters that is a blast to use in combat. But, like every other hero in the game, you’ll have to work to master his moves to truly become a legend yourself.

Here are a few tips to help you get started:

When playing the Centurion, you’ll always want to be very, very close your opponent, regardless of how offensively they play. Due to the gladius being one of For Honor’s shortest weapons, you won’t have many opportunities to deal damage from a distance, unless you manage to successfully land the Centurion’s overhead charge attack, which can easily be blocked or dodged by a skilled opponent.

Lock Your Opponent Down

The Centurion is best when locking down opponents like the Lawbringer, which means you’ll want to consistently take advantage of your hero-specific Knockback Kick to drain the stamina of your enemies. Be sure to follow it up with an additional kick to stun your opponent, too, which then gives you an opportunity to use a charged strike that can lead into a deadly combo. What’s great about the Centurion is that whenever you knock an opponent down, you’ll be able to perform a jumping attack with your gladius for a massive amount of damage as well.

One of the Centurion’s most powerful hero-specific abilities is a brutal attack chain called Imperial Might. This ability allows you to finish any series of chain attacks with an unblockable attack enemies won’t often see coming, especially if you’ve got them locked down with the Centurion’s kicks. After you have an enemy low on stamina by using kicks, jabs, and throws, always follow up with an Imperial Might combo if the opportunity presents itself. Just remember not to be too aggressive, since good players will be able to retaliate if you aren’t carefully maintaining your own defenses.

Even though the Centurion is a hero who relies heavily on abusing an enemy’s mistakes against them, he also has a surprising number of moves you can use while defending yourself as well. Whenever you manage to successfully guard break your opponent, you can use your light attack to initiate a quick bash that will knock them back and drain their stamina, which can be followed up with an Imperial Might combo. Also take advantage of your parry combo, allowing you to follow a successful parry with a free heavy attack or unblockable charged attack. These combos do massive amounts of damage to an enemy’s health and stamina, and can easily turn the tide if you’re a little starved for health.