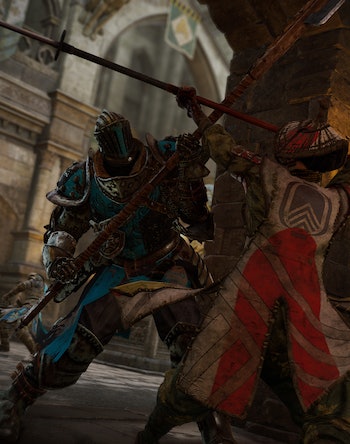 As a longtime fan of challenging video games like Bloodborne and Dark Souls, I’ve really been enjoying my time with For Honor. The game has a relatively simple set of mechanics complemented by an extremely steep difficulty curve, and layers of depth are continuously added the further you dive into the game. The game’s 12 unique character classes — each with their own special moves — are rivaled by few other multiplayer games. The road to mastery is a long, frustrating one, but one that makes For Honor feel like a new twist on old gameplay with a harsh difficulty curve worth pushing through.

When I first started playing For Honor, I immediately fell in love with the combat system: the Art of Battle. It’s an active system which requires you to actively move your character’s guard in one of three different directions: left, right, or up. By doing so, you’ll actively block incoming damage from that angle provided you have the stamina and can attack your opponents with light or heavy attacks from the same direction. If they aren’t blocking the direction you attack from, you’ll land a hit, exchanging swings until you manage to whittle down their health enough to land the killing blow.

While fighting, you can also break through your opponent’s guard if they block too many of your attacks, and you can also dodge out of the way of incoming attacks provided you move in the appropriate direction. As I was getting started myself, I spent most of my time playing as the Viking’s Raider class. Focused on heavy damage and disrupting enemies, the Raider was an absolute powerhouse during the early testing phases of the game, but — like a good boss fight in Dark Souls — almost every opponent I went up against would fell me immediately.

My problem was that I didn’t understand how to counter the characters I was going up against, like the Warden and the Conqueror, who kept abusing me with a series of pushes and guard break attacks which would lock my Raider down with little effort. Instead of sticking with my Raider, I began to swap around looking for a character class that I could use to counter my opponent’s attacks.

While looking for a hard counter, I went full circle with every character I had access to, screaming in frustration as my opponents continued to take my head off while taunting me in the process. Eventually, I made my way back to the Raider, and just like learning how to tackle any challenging boss encounter in Dark Souls, I did something I hadn’t done in a competitive multiplayer environment for a long time: I practiced against A.I. opponents for an entire afternoon.

Essentially, I treated my Raider like I would any character build during my time with Dark Souls or Bloodborne while I practiced: I evaluated my strengths and weaknesses in battle, calculated what strategies I would have to use against each opponent, and then executed them to the best of my abilities. Following that afternoon of practice and evaluating my character’s capabilities, I started winning both 1v1 Duels and 2v2 Brawls against players who had previously beaten me with little effort. Countering moves I hadn’t been able to deal with and punishing my enemies for abusing their own powerful combos felt exhilarating, and with each successful victory, I became more dedicated to perfecting my Raider, an addicting loop which closely resembled the one which drew me into Dark Souls years ago.

Mastering the Raider against more difficult opponents brought me back to my days with the Road of Sacrifices while I was working through Dark Souls III for the first time. See, the Road of Sacrifices is plagued by the game’s PvP-based invasion mechanics, where players from other covenants seamlessly enter your world and try to kill you for glory, rewards, or just because they feel like it.

Originally, I got ridiculously mad at these players continuously killing, preventing me from moving on. But with enough practice, I begin to learn how to take down other players, and, following a few dozen deaths, I managed to eliminate three skilled PvP players blocking my way to Farron Keep. I’ll admit that, at that moment, I had an overwhelming sense of pride as I walked down the ladder into the next area, and from that encounter forward? I embraced and enjoyed fighting other players, a part of the Dark Souls experience I previously had a severe disdain for.

Naturally, I wanted to go through the same experience of mastery with an entirely new class when For Honor officially released. Following a few different trial runs against some A.I. opponents, I opted to take on the challenge of one of the game’s more well-rounded character classes called the Warden. Unlike the Raider, the Warden isn’t much of a powerhouse. Instead, she’s designed as a counter master with a set of utility-focused moves focused on disabling your opponent continuously.

As I did with the Raider in testing, I played through an afternoon of practice matches against A.I. opponents and friends to learn how each of the Warden’s moves were best used in combat. Originally, I did better than my time in testing with the Raider, but some of the new characters like the Lawbringer and Shugoki gave me plenty of trouble since I hadn’t played against them before launch. Slowly though, I improved and learned to to counter their strongest combos with my own. With enough practice, I moved into For Honor’s competitive multiplayer again — continuously standing toe-to-toe against skilled players with my Warden’s abilities while learning how to better handle my character with each passing match.

Despite many tense moments where I felt a loss was inevitable, For Honor has continuously forced me to push my limits with the Warden since the game launched last week. Like both Dark Souls and Bloodborne, death is a door which leads to mastery in Ubisoft’s latest title, allowing players to further their abilities in combat with each additional match. Regardless of the final outcome in each passing match of For Honor, you’re always learning how to improve your character, which is the reason I don’t think I’ll stop striving to improve my own skills with the Warden anytime soon. This addicting loop of mastery may not be perfect, but it’s easily one of For Honor’s greatest successes as a competitive multiplayer experience and one of the best reasons to pick up the game for yourself.