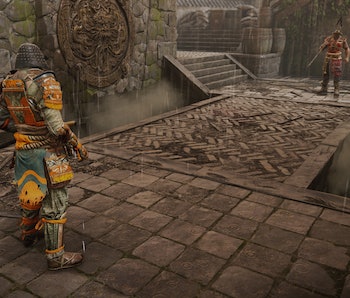 No matter which character class you dedicate your time to in For Honor, you’ll have to work your way to victory with the loop of everlasting practice. While the basics of For Honor’s Art of Battle combat system are relatively easy to figure out, there are a dozen or so advanced combat mechanics you’ll be required to learn, provided you want to keep a leg up on your opponents. Perfectly timed guard breaks are a necessity, as well as using all your individual character’s special moves, but if you truly want to fight with the best of the best, you’re going to need to master For Honor’s parry mechanic.

Parrying is one of the most advanced and difficult maneuvers to pull off in For Honor, but it’s one which can almost always turn the tide of a 1v1 scenario, provided you use it at appropriate times. Available to every character class, a parry allows you to counter an incoming enemy attack while simultaneously throwing them off balance to drain a large portion of their stamina bar, allowing you to follow up with an attack that is hard to completely deflect. What’s great about parrying is that you can also use it to deflect any character’s unblockable attacks too, giving you a line of defense against some of the most powerful moves in the game.

It’s important to remember that many of the character classes in For Honor have various special moves or combo attacks which are entirely reliant on pulling off a successful parry to begin the chain, such as the Lawbringer and Orochi. To use these respective classes to their full potential, you’ll have to learn how to successfully pull off parries continuously.

To successfully parry an incoming enemy attack, you must wait until your opponent’s weapon is milliseconds away from connecting with your character (as shown onscreen with a dark-red dial and flash), then toss a heavy attack in the direction your opponent is attacking from. Doing so correctly should yield the satisfying sound of colliding metal and toss your enemy back from you. In the case of an unblockable attack (as indicated by a flame), you’ll have to time your parry on instinct alone since no flash will occur on your dial during the attack.

A successful parry will always allow you to follow up with an attack, combo chain, or special move to deal a hefty amount of damage, but if your opponent is good enough they’ll often be able to block or counter with a parry of their own. My advice is to get in the habit of following up each parry you manage to pull off with a guard break instead, which will almost always allow you to land a heavy attack for a massive amount of damage. This is especially helpful against shielded opponents, who have much better defensive capabilities than the other character classes in the game.

One important thing to note about parrying attacks is that every character class you face in For Honor will have differing attack patterns and visual delays when it comes to their offensive moves. Your parry must be timed perfectly with an incoming attack to register, so be ready to practice parries against many different targets if you want to master the technique. Against fast opponents like the Orochi, you’ll always parry just a second after they swing, while larger targets like the Shugoki require you to wait until their attack animation finishes to stagger them successfully.

Remember, practice makes perfect when it comes to parrying in For Honor. If you’re just learning the technique, consider recruiting a friend for you to practice with in custom games or spend a few hours queuing up against A.I. opponents in 1v1 Duels to build up your responsiveness with the mechanic. Then, once you’ve developed a solid base for it, move into 1v1 Duels or 2v2 Brawls against other players to start working your way through the ranks again.