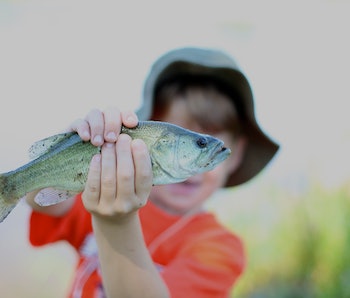 Trouble catching a fish? Don’t blame that dubious phenomenon called “luck” – or a lack of it. Instead, consider that you may have been outwitted by a slimy, small-brained, primitive creature.

Large-brained humans can easily scoff at puny fish minds, but research suggests that these diminutive neural clusters are sophisticated enough to identify and avoid tempting fishing lures. This leaves the fish alive, and you sulking in a boat wondering why the suckers won’t bite. Scientists from the University of Florida visited the rarely-fished Devil’s Hole Lake near Hawthorne, Fla., and after nearly a month of fishing, discovered that the bass therein quickly learned to avoid these earnest attempts at human trickery. The results were published in the university’s Fisheries and Aquatic Sciences Program newsletter.

“The most likely hypothesis is that fish were avoiding capture after being exposed to lures,” says study co-author Mike Allen, a fisheries scientist at the University of Florida and director of the Nature Coast Biological Research Station.

This means that successfully deceiving a fish likely requires a diversity of glistening, spinning decoys, lest the fish catch on to a plastic lure too swiftly, leaving you with a pathetic, fish-less bucket.

Professional, competition-level anglers notice the trend. “I certainly feel like if you catch one, your chances of catching it again are much less,” said Jeff Gustafson in e-mail. In preparation for tournaments, Gustafson wrote that he often cuts the hooks off of lures, so he doesn’t snag any fish, which could potentially give the animals a sharp reminder of what not to bite.

To prove that bass can distinguish between a flashy lure and an actual meal, the University of Florida scientists visited Devil’s Hole Lake three times a week for four consecutive weeks, dropping two different lures into the murky water: a chrome and black fish-lookalike and a plum-colored worm mimic covered in shiny emerald flakes. Two anglers fished for six hours a day, and each time they snagged a ravenous bass, the angler-researchers electronically tagged the terrified fish with a unique marker, allowing scientists to see if they recaptured a fish, and with which lure.

The results suggest that the wily bass were actively avoiding recapture. After just three days of experimentation, the fish grew less naïve and the researchers’ catch rates plummeted. On day one, they were catching 2.5 bass each hour with the black and chrome lure. Three days later, they caught an average of 0.5 fish each hour. The bass picked up on the worm trickery, too. By the end of the experiment, the anglers snared just one bass an hour, compared with nearly two an hour when the experiment began.

One might think that the bass, annoyed by the incessant fakery, simply swam to another part of the lake. But the scheming humans were one step ahead of their gilled-research subjects, and they fished throughout the entirety of the lake, tempting bass everywhere with dazzling chrome and emerald lures.

It’s not too surprising that the bass realized that the lures, while intriguing, were actually death traps. “Lots of people don’t give fish enough credit for the complexity in their behavior,” says Allen.

Black-tipped sharks in the French Polynesia recently showed a remarkable ability to avoid being recaptured. Additionally, humans are often proud of their ability to make and use tools, but some fish, like wrasse, employ rocks to bludgeon sea urchins and reveal their nutritious insides. And when their nests become threatened, catfish have been seen gluing their eggs to leaves or small rocks and carrying the valuable embryos around with them.

Knowing that fish have such keen minds, the best shot at a successful fishing outing might mean seeking out a remote fishing hole, where the creatures aren’t conditioned to your neon pink lure. Or, as you wait listlessly on a dock, pier, or boat, it might be wise to come equipped with an arsenal of brightly-hued, sparkling weapons. Allen says that he’s noticed pro bass anglers constantly attempting new luring techniques. “They’re always trying to modify their approach, showing the fish a little something different,” he says.

In short: While it’s easy to assume that the fish just aren’t biting, below the water they might be scoffing at your too-obvious attempts at deception.