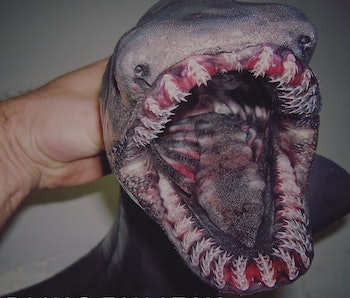 Around 71 percent of the Earth’s surface is covered in water, but unless you have gills, you probably haven’t explored it all that much. Enter Roman Federstov. A Russian fisherman, he works on a trawler near the northwestern city of Murmansk, and he’s been sharing his deep sea discoveries on Twitter for most of this year. Federstov has revealed a truth that we probably suspected all along: the ocean can be terrifying and thoroughly fascinating, filled with creatures whose appearances you’ll see when you close your eyes at night.

There are flesh-piercing pinchers, and creatures with gaping mouths, and even some adorable starfish. Thankfully the internet can offer a glimpse at the most petrifying of them. Here are 20 of the best:

This one looks slightly human in a few disturbing ways. That is all.

This guy’s amber eyes will give you a fright in the dark.

“Sorry, can I just interrupt…”

Impressive set of gnashers … probably not so nice if you’re on the receiving end.

This hand-sized foe looks manageable, but probably wouldn’t fit in with a home aquarium.

This guy looks how I feel after a night out.

As does this one.

Eye of fish or eye of Sauron?

Would not like to be in between those claws.

This one looks like a ball of ink. It probably isn’t, as that wouldn’t be a very practical design for a fish, but it looks like one.

Rays are probably the best paper-shaped fish in all the Russian seas.

Ask a question by turning your body into the shape of a question mark.

This guy looks ready to start a fight.

This gives you a sense of scale.

This is all kinds of terrifying.

And finally, a nice little soothing one to round things off. Look at those colors! If there were more fish like that in the sea, and less like the other 18, perhaps I would’ve gone into fishing instead of just writing about fish.

More like this
Science
5.5.2022 11:00 AM
Webb Telescope alignment and more: Understand the world through 7 images
By Robin Bea
Science
5.17.2022 12:00 PM
We now have an image of the Milky Way’s central black hole — here’s how it happened
By Elizabeth Howell
Science
5.17.2022 11:30 AM
A skyscraper-sized asteroid is wandering toward Earth
By Brooke Edwards
Share: