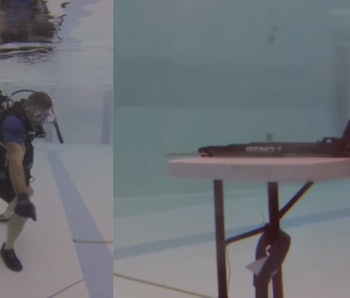 In some professions, like that of an international super-spy, deep-sea fisherman, or tropical grouper fish, the skill of catching a speeding underwater spear gun projectile would be very useful.

It’s unclear what Ashrita Furman does exactly, but we can’t rule out international super-spy (ok, we can, he manages a health food store in Queens, New York … or does he?) Furman has more Guinness World Records than any other person alive, which is completely incredible, but slightly less incredible when you consider the Guinness World Records are just people making shit up at this point. Still, Furman can put out blowtorches with his tongue, jump rope while on a pogo stick, balance eggs on end, and now, catch spears flying out of a spear gun while underwater.

Furman’s latest record is below: he uses what appears to be reinforced gloves while standing on the bottom of a swimming pool to catch the sharp spear bolts, usually used for spear-fishing, in his hand. He’s able to snag 14 of them in 60 seconds, which is nothing compared to the blowtorches (he tongued out 47), but still pretty impressive considering he was catching arrows in his hand underwater. Check out the full video below.