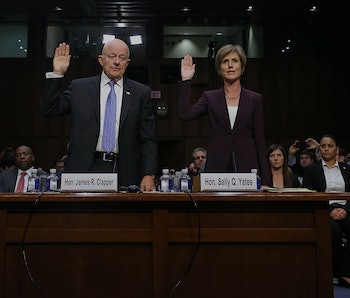 Sally Yates, the former acting Attorney General appointed by President Barack Obama and fired by President Donald Trump, has quite a story to tell. Before her firing, Yates advised the White House that Michael Flynn, Trump’s appointed National Security Advisor, was in a “serious compromise situation,” and that “the Russians had real leverage” that could be used to blackmail him.

Yates granted her first public interviews since Trump fired her for refusing to uphold his ban on travelers from seven majority-Muslim countries on January 30, speaking with The New Yorker and CNN. Last Monday, May 8, Yates testified before Congress about Flynn’s contact with Russian Ambassador Sergey Kislyak before Trump’s inauguration, revealing that she warned the White House that Flynn could be a blackmail risk before he was eventually dismissed. In her most recent interviews, Yates finally made it clear what, exactly, the Russians had on Flynn.

How It Went Down

The entire Flynn debacle started on December 29, when the former general met with Sergey Kislyak, the Russian ambassador to the U.S. On the same day, then-President Obama had announced a series of sanctions against Russia, in retaliation for hacking and disinformation during the 2016 election. Flynn, a member of the Trump transition team, getting ready to step into the role of National Security Advisor, discussed the sanctions with Kislyak. In and of itself, Flynn’s actions were suspicious — he wasn’t an official member of the government yet, and chatting with the Russian ambassador potentially violated a U.S. law that prevents citizens from negotiating with foreign governments. But Flynn’s biggest misstep was that he lied about it to Vice President Mike Pence and other U.S. officials, and said he never mentioned the sanctions to Kislyak. Aside from that breach of trust, the biggest problem was that there was no way he could get away with it. The Russians knew that Flynn had discussed the sanctions, and they also knew he had lied to the vice president. That’s where Yates comes in.

The Department of Justice Gets Involved

Flynn lied to Pence in early January, and the VP-elect parroted that lie — that Flynn did not discuss the sanctions — in an interview on January 15. But on January 23, day three of the fledgling Trump presidency, Press Secretary Sean Spicer gave the press a rundown of Flynn’s meeting with Kislyak. He didn’t mention any talk of sanctions. Here’s how Yates told the New Yorker it all went down:

“It started out as general stuff, and then you’ve got the Vice-President, and then Sean Spicer on the 23rd gets very specific.” Yates said that at that moment, with Spicer publicly giving a different story from what Flynn and the Russians knew was true, “compromised” Flynn. On January 24, he had to sit down with the FBI, which Yates, as acting head of the Department of Justice, was working with.

“Flynn is interviewed [by the FBI] on the 24th. We get the readout on the 25th and have consult about impact on investigation, and I call [The White House] first thing on the 26th,” she told the New Yorker.

Yates immediately went to White House Counsel Don McGahn. Spicer described her warning about Flynn as a “heads up,” but Yates definitely remembers it differently, leading to this hilarious Veep-like exchange with the New Yorker reporter:

Yates said, about the “heads-up,” “I certainly never used that term. And so I’m not sure where that came from.”

No, Yates replied, “Is there an emoji for that?”

And then, for 18 full days, the White House did nothing. Flynn resigned on February 13.

“We had just gone and told them that the national-security adviser, of all people, was compromised with the Russians and that their Vice-President and others had been lying to the American people about it. We expected them to act,” Yates told The New Yorker. “We expected them to do something immediately.”

The New Yorker will run a full profile of Yates in the May 22 issue, and her interview with Anderson Cooper airs Tuesday at 8 p.m. Eastern on CNN.