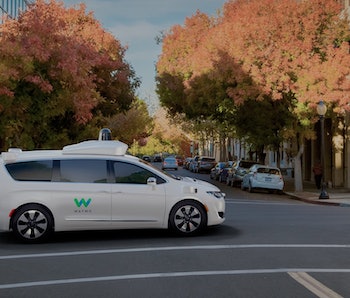 Uber’s self-driving car program is on the ropes, and two of its biggest competitors just announced a tag-team plan to take it down.

On Sunday, Lyft and Waymo confirmed that they had signed a deal to collaborate on self-driving technology. Lyft, of course, is the upstart underdog to Uber’s reigning champ of ride-sharing, while Waymo is perhaps the frontrunner in the race to create a fully self-driving car. Uber is trying to create self-driving car tech and apply it in a massive ride-sharing service all on its own, something Lyft’s comparably sparse resources wouldn’t allow, but the Waymo-Lyft team up means all of Uber’s future efforts will face a strong challenger.

Wrestling analogies aside, the future of Uber’s self-driving car division is currently completely up in the air, pending a massive lawsuit by Waymo (Google/ Alphabet’s self-driving car wing) that alleges all kinds of wild things, chief among them that Uber’s head engineer Anthony Levandowski stole Waymo’s technology when he left the latter company to found Otto, which Google claims was essentially a fake company that allowed Uber to benefit from Levandowski’s time at Waymo.

The partnership is almost a no-brainer. Compared to Uber, Lyft is still far behind in terms of overall rider base and cities covered, but the rival service has made gains with every new scandal and controversy that hits Uber (see: Greyball, sexual harassment allegations, viral internet protests, and CEO meltdowns.) Meanwhile, Waymo is in the middle of a massive lawsuit against Uber.

To be fair, it also makes sense from a tech perspective, as both companies were careful to point out.

“Waymo holds today’s best self-driving technology, and collaborating with them will accelerate our shared vision of improving lives with the world’s best transportation,” a Lyft spokeswoman said in a statement to the New York Times.

Lyft has had public plans for self-driving cars since at least 2016, but unlike Uber, hadn’t made any public progress on an independent program. But never fear, Waymo is here.

The two companies have yet to formally announce the deal, so details about how the partnership will work are still a bit unclear, but it’s very likely you could get into a pink-mustachioed Googlevan in the near future.

More like this
Innovation
Sep. 15, 2022
This jet engine-powered EV revs up a wild 70-year-old idea
By Andrew Moseman
Innovation
Sep. 22, 2022
Trash can-sized robots could revolutionize how you travel — but there's a catch
By Molly Glick
Innovation
12 hours ago
ePlane? Electric planes may come sooner than you think
By Gökçin Çınar and The Conversation
Related Tags
Share: